A well known piece of the British landscape that had become depleted of flora and fauna because of years of intensive farming is alive with wildflowers, butterflies and birds this summer.

Since the National Trust acquired fields on top of the white cliffs of Dover two and half years ago after a GBP1m national appeal championed by Dame Vera Lynn, it has worked to restore the area to rich grassland.

The charity is excited at the results, reporting an increase in birds including skylarks, corn buntings, partridges and meadow pipits. Peregrine falcons are benefiting from an increase in wild pigeons, a main source of prey.

Fields have been vivid with poppies, ox-eye daisies and buttercups, and staff hope the new habitat will in time support chalkland butterfly species such as the adonis blue and the dingy skipper, as well as continuing to provide a home for more common marbled whites and red admirals. 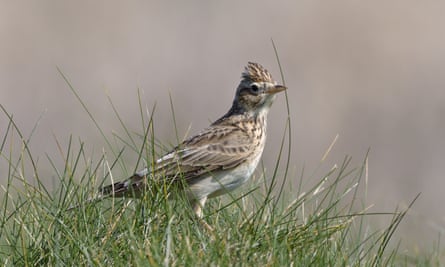 The fields are part of a 178-acre plot that the trust bought in 2017. It immediately set about reversing the effect of 70 years of intensive agriculture that began after the second world war.

In 2018, barley was sown to remove some of the nutrients from the well-fertilised soil, preparing it for a wildflower and grass mix. Typically, chalk grassland wildflowers prefer a low-nutrient soil to thrive.

A “bumblebird” seed mix, which includes cereals, brassicas and wildflowers, was sown last autumn to provide birds with a supply of food through the winter, and a range of nectar-rich plants for pollinators in the summer. The wet winter that followed helped create an explosion of colour.

Virginia Portman, the general manager at the white cliffs for the trust, said: “After many decades of intensive farming, it’s fantastic to see this stretch of the cliffs buzzing with wildlife again.

“The cliffs hold an incredibly special place in our country’s history, but they’re also important for nature as much of the habitat we have here, chalk grassland, is increasingly rare in the UK.

“To see the fields returning to their natural state, covered in poppies and ringing with the sound of skylarks, is really heartening. It’s a tribute to everyone who supported our campaign and helped us buy back this landscape for the nation.” 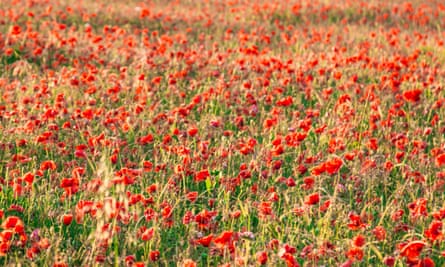 The trust’s 2017 fundraising campaign reached its target in just three weeks, its success credited in part to the support of Lynn, who died aged 103 last month.

Portman said: “The white cliffs of Dover will be forever intertwined with Dame Vera Lynn. Her music marked the start of the enduring emotional connection that people feel when they visit us here, and we’re so grateful for her support over the years. In helping us to save the land and restore it as a haven for wildlife, she has left a legacy for future generations to enjoy.”

Mark Love, who carries out surveys for the British Trust for Ornithology (BTO) in the area, said: “The quantity of skylarks, meadow pipits and corn buntings clearly enhanced by the changed land management is remarkable.”

Saturday is National Meadows Day in the UK. According to the charity Plantlife, 7.5m acres of meadows and flower-rich grasslands have been lost since the 1930s.

In the longer term, the trust aims to join up 150 hectares of habitat along the cliffs, linking land purchased in 2012 and 2017.

One, two, tree: how AI helped find millions of trees in the Sahara

Which weird Australian fuzzy mammal you are possibly unfamiliar with is your favourite? Let’s...

- January 3, 2021 0
Impala run through the thorn bush, ibis fly above the lake and lightning forks over the horizon as a storm rolls in from the...

Country diary: the rising river threatens to overtake the road

- January 8, 2021 0
Marshwood Vale, Dorset: The lane ahead floods often and I’ve learned to respect the water’s power The road ahead is covered with sliding sheets...

- September 23, 2020 0
Brazilian meat giant JBS said on Wednesday that it will monitor its entire supply chain by 2025, including problematic "indirect supplier" Amazon farms it...
© Copyright www.thepoliticalplaybooks.com