Returning an area the size of Dorset to wild nature, reintroducing extinct lynx, pelicans and beavers and championing regenerative farming to restore soil health are the radical aims of a new charitable foundation.

But the most revolutionary feature of WildEast may be that it is founded by three farmers in the most intensively farmed region of Britain.

Hugh Somerleyton, Argus Hardy and Olly Birkbeck, who own more than 3,200 hectares (8,000 acres) on their family farms in Suffolk and Norfolk, are seeking to persuade farmers and also councils, businesses, schools and ordinary people across East Anglia to pledge a fifth of their land to wildlife.

WildEast aims to dedicate 250,000 hectares of East Anglia to wildlife over the next 50 years while also working with schools to enhance children’s knowledge of farming and wildlife and creating an accreditation system to boost wildlife-friendly farmers.

“We want to wake up the regional collective consciousness,” said Lord Somerleyton. “If you’re prepared to rewild 20% of your backyard, that humbles the farmer because you’re not getting a grant for it. We in the east want to do it together and not wait for the government.”

WildEast has already gathered support from farmers of all sizes from across East Anglia including vicars, teachers, grassroots conservation projects and industrial estate owners.

According to Somerleyton, who is creating a 400-hectare fenced enclosure of wood pasture, restored grassland and heathland with free-roaming large black pigs and Exmoor ponies on his 2,000-hectare estate, the old EU subsidy system in effect paid farmers to give about 4% of their land to wildlife. 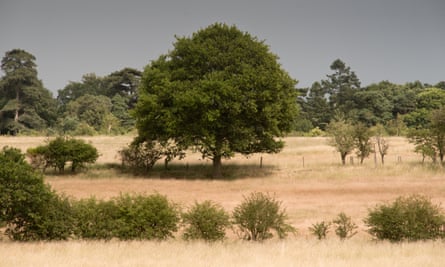 The government’s new post-Brexit support system of “public money for public goods” could support farmers to turn 10% of their holdings over to wildlife but Somerleyton said farmers needed to reverse postwar losses in biodiversity without subsidies.

Somerleyton said farmers had remained relatively unscathed while manufacturing endured huge upheavals in recent decades. “We’ve been driving around in Range Rovers and going on skiing holidays. In East Anglia it’s been very rewarding being in agriculture. I sound like I’m biting the hand that feeds me but we have been very protected from the troubles of other industries. The awful thing is that protection, not deliberately, has accelerated nature decline. Farmers have become pretty grant-dependent. This movement is about trying to move the needle.”

Hardy said WildEast was not about chastising farmers but seeking nature restoration in “churchyards, barnyards and backyards” and nurturing dialogue and change across society, including consumers who buy cheap meat that is farmed indoors. Britain slaughters nearly 1 billion chickens each year.

Hardy said: “There’s a lot of blame put on farmers. They are seen as the people who need to make the change. WildEast is about broadening the focus – it’s about all of us, our gardens, how people are eating, what people are eating, and local food markets.”

Restoring wildlife is “not stopping farming, it’s fitting farming systems into natural systems so we can restore biodiversity”, added Hardy. “It’s not rewilding, it’s making things wilder – not to create space for nature but to find out how we live inside the ecosystem. We don’t want anyone to visit a nature reserve, we want you to live in one.”

Despite being a sheep farmer, Hardy said he would be happy to farm alongside reintroduced lynx. “We have to accept what’s here and what was here,” he said. “Far more sheep are killed by parasites than lynx, where they are present in natural ecosystems. Worms are a much greater threat.”

According to Somerleyton, many farmers have been inspired by Isabella Tree’s book Wilding, which tells how she and her husband, Charlie Burrell, returned Knepp, their 1,400-hectare farm to nature, farming organic meat from free-ranging deer, cows and pigs.

Although their West Sussex farm has since benefited from a surge in tourism, Somerleyton said the Knepp model was not applicable to every farmer.

Somerleyton, who founded the restaurant chain Dish Dash before returning to his family estate, said he was “very aware” that smaller farmers did not share his willingness to devote large tracts of less fertile soils to wildlife, or diversify his income with tourism and gastropubs, but said a region-wide WildEast accreditation system could help small, eco-friendly producers.

Somerleyton said his 100 herd of outdoor, free-living cattle produced too much meat for his pubs “but far too [little] to satisfy Waitrose. If there’s a growing band of WildEast producers, together we can feed a market”.

Somerleyton said there had been “a lot of head-scratching” by farmers responding to WildEast. According to Hardy, who is also an architect, many have a cautious attitude of “we’ll just watch and see what comes out of your harvest”.

But Birkbeck, who has restored a 200-hectare heathland that was ploughed up during the second world war on his west Norfolk farm, said a younger generation of farmers was increasingly aware that they needed to move away from chemical-dependent farming, with protection for soils and predatory insects that regulate pests.

He said: “Farmers are beginning to realise that they have a moral duty to protect the countryside that they are dependent on – that we have to work with nature rather than shut it out, because it will find you out in the end. We’ve tidied nature up and swept it away in the last 40 years. If we can only get back to accepting mess again we’d be getting somewhere. We’ve started WildEast to make that conversation public.”

WildEast supporters include the Chet Valley B-line, a more than 10-mile (17km) corridor of pollinator-friendly habitat, and the Suffolk pig farmers Dingley Dell, who sow wildflower strips alongside their outdoor pig pens, creating a habitat for more than a million bees. “Get 1,000 people to do that and it’s a billion-bee project,” said Hardy.

The new charity is developing an app so people can add their wilding pledges to “a map of dreams”, whether it is restoring an old pond or creating a hedgehog- and slug-friendly garden. WildEast hopes councils will get involved: for instance, derelict land earmarked for industrial estates in towns such as Lowestoft could be given planning consent with 20% set aside for natural ecosystems.

WildEast is also devising an education programme for interested schools, and is encouraging dialogue via #mywildeast on social media, even producing a TikTok video.

- May 6, 2021 0
Slashing methane emissions is vital to tackling the climate crisis and rapidly curbing the extreme weather already hitting people across the world today, according...

Hard-won gains at risk as Delta variant spreads- WHO

Oil benchmarks settle at highest since 2014 on short supply

- September 3, 2020 0
The environment minister, Sussan Ley, has appointed an auditor to investigate her own department over the export of hundreds of native and endangered parrots...
© Copyright www.thepoliticalplaybooks.com