Residents in parts of Britain that were hit by winter flooding have experienced long delays to repair works and insurance claims while stuck in temporary accommodation in the face of a national lockdown.

Thousands of people were forced to evacuate their homes after record rainfall caused severe flooding between November and February in parts of the country.

A fortnight ago, Daniel Greenslade, 35, and his partner Jade Croft, 29, moved back into their home in Fishlake, Doncaster, which flooded on 8 November when the River Don burst its banks. At the time, both were still in hospital following the birth of their daughter Indie earlier in the day.

Although the temporary house in which they had been living in nearby Barnby Dun is newly renovated, having to downsize considerably proved a struggle. For much of the lockdown, the family have spent their days camped out in the open-plan kitchen and living room.

“With a baby and having to work from home, it’s been a bit of a nightmare,” said Greenslade, who works for a conference call software company.

Despite industrial driers whirring away for four months, it took until March for their house to dry out. A builder had just begun to replaster the walls when the government imposed the lockdown – setting back their efforts again as building materials manufacturers and suppliers closed shop. 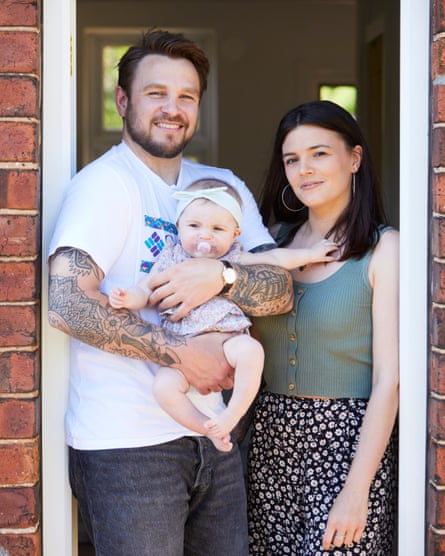 “Everything should’ve been done by the middle of May. That’s when the kitchen would’ve been fitted, the carpets would’ve been laid. [The pandemic] added at least another month to the work and extra costs,” said Greenslade.

Their extensive limbo will be familiar to many in Fishlake, where about 40 residents were forced to evacuate their homes following the deluge, and a number of people are still camped out in static caravans on their driveways.

Peter Pridham, the church warden at the village’s church, St Cuthbert’s, said the pandemic had also further delayed the response of insurance companies, meaning some families are still unsure when they will even be able to begin repairing the destruction.

Although church volunteers helped in the small ways they could between March and June – delivering food parcels to flood victims who were isolating, as well as cleaning products to those tackling the aftermath of sewage-contaminated floodwater – he added that the impact of the hold-up could have a long-term effect on people’s mental health.

Just over a 10-minute drive up the road, Kevin Lorryman, 56, is still waiting to get the green light from his home insurance company to demolish and rebuild his bungalow in Snaith, east Yorkshire.

In February, 24 homes in the village were flooded after heavy downpours caused the River Aire to overtop. Lorryman’s was one of the most devastated after it got almost completely submerged under sewage-infused water.

“Things are delayed because of the world situation, but surveyors have been in and said the interior walls have started moving,” said Lorryman, who added that structural engineers had also inspected the property. “The gut feeling is that it will have to be rebuilt, because [the insurance firm] haven’t cleaned the house or gone in with dehumidifiers.”

Since last year, Lorryman, his wife Catherine, their daughter, son-in-law and two young grandchildren, have been in a rented property in nearby Cowick.

Although being furloughed from his job as a project manager has brought on more familiar lockdown hobbies such as gardening and taking his grandchildren on bike rides, the Lorrymans have also been kept occupied cataloguing 14,573 items that were destroyed in the house by the flood for insurance purposes.

It is unlikely the family will be able to move back to their rebuilt flood-protected home until at least next September, but Lorryman said he felt “guilty” that others were in more difficult situations during lockdown.

Some of his neighbours, he said, were still living in a room at The Brewer’s Arms pub in Snaith during lockdown. On top of that, he added, “we’ve been able to spend so much time with our family, and there are so many people who haven’t been able to do that.”

Nature is not an impediment to UK economic growth: it’s vital to it | Tony Juniper

- May 12, 2021 0
Humanity's enormous emissions of greenhouse gases are shrinking the stratosphere, a new study has revealed.The thickness of the atmospheric layer has contracted by 400...

Weekly Comic: The Party’s Over, The Hangover’s Coming

Noisy environments can have detrimental effect on plants, study finds