Woodland fungi are a furtive bunch, living mostly unseen under the soil or inside other organisms, digesting whatever their creeping threads can find: nature’s recyclers. Their appearances are often fleeting, limited to a dusting of rust spores on the underside of a yellowing leaf or overnight eruptions of toadstools in autumn. But bracket fungi are a class apart: big, durable and sometimes a little sinister, and none more so than chicken of the woods, Laetiporus sulphureus.

On a humid, windless, overcast evening, in fading light, an air of lassitude had settled over this ancient woodland. No birdsong and few flowers now that the spring flora had withered away under a tangle of brambles, grasses and ferns. But we could see the sulphur-yellow bracket fungi, at head height on a decrepit, dying oak, from a hundred yards away, arranged like closely spaced shelves on either side of the trunk. As dusk closed in around us, they seemed to glow. 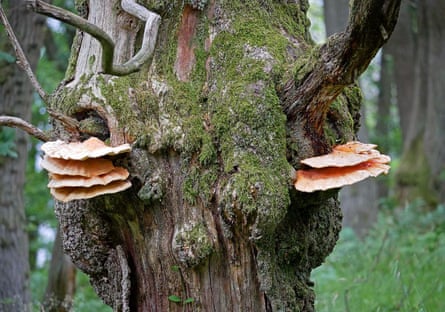 Gastronomes relish chicken of the woods as a delicacy, comparable in texture to well-cooked chicken breast, with a rich fungal aroma. So do insects: these specimens would undoubtedly be full of maggots. The dinner-plate-sized brackets were past their best and would surely be chewy and tough, having lost the plump fleshiness of youth. Their webs of fungal hyphae were slowly hollowing out the oak’s trunk, turning it into something with the texture of a crumbly biscuit.

I picked up a fallen bracket and took one home, to see what might hatch out. Nothing for four days, but on the fifth a blizzard of minute flies swirled out when I lifted the lid of the container. Then, on the 10th day, something special.

A cork moth, Nemapogon cloacella, just 5mm long, scuttling across the surface of the decaying fungus. At first it seemed just another dull, brown micro-moth, but a magnifying glass revealed fringed, upswept wings clothed in scales of mottled brown, white and gold; an insect of exquisite beauty. 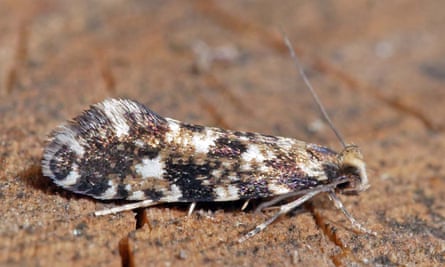 Heartwood of oak, created by a sapling’s sunlit leaves perhaps two centuries ago, broken down, molecule by molecule, reconstituted into fungal tissue, then reincarnated yet again as a tiny jewel of an insect.

The Guardian’s climate promise: we will keep raising the alarm

- October 5, 2020 0
The global climate crisis is the emergency of our times. Amid all the fear and sadness of 2020, it remains the overwhelming long-term threat...

- October 12, 2021 0
EnvironmentMore than 100 moorland fires reported in England in past four daysCampaigners say there has been a fivefold increase in damaging and 'absurd' burnings...

Kate Grenville, Sofie Laguna, Julia Baird and others: the 20 best Australian books of...

- December 16, 2020 0
1. Lucky's by Andrew PipposPicadorThis novel is a saga in the truest definition of that word, spanning more than 50 years of one Greek-Australian...

Cop26: are we finally saying goodbye to coal?