There are significantly more species of day-flying moths in the UK than there are butterflies – over twice as many large “macro moths”, plus a number of smaller, harder to identify “micro” species – but they are often overlooked in favour of their more familiar cousins.

It’s impossible to ignore the hummingbird hawkmoth darting back and forward between my buddleia bushes in the company of another summer visitor, a silver Y. As it hovers with an audible hum, supping nectar through its inch-long curved proboscis, I can see why this spectacular migrant is easily mistaken for its namesake. Though unrelated, both creatures have evolved similar traits – a perfect example of convergent evolution.

As I walk through the knee-high grass of my unmown lawn, I disturb a white plume. At rest, the moth’s narrow, spurred wings are held out at right angles, but as it flutters weakly around my legs it splays the feathery plumes, like a tiny angel. 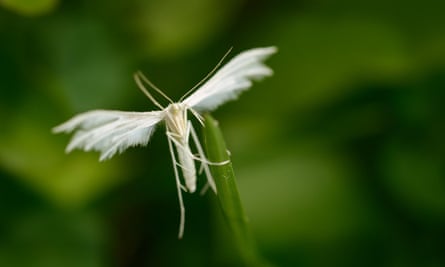 Not all day-flyers are so striking at first glance. At a distance, the mint moths that throng my garden mints and nepetas appear a nondescript brown, but up close their forewings shimmer a rich reddish-purple, each adorned with a single golden spot.

UK moth populations are in steady decline and the situation is particularly dire here in the south, where numbers have fallen by 40% since 1968. The garden tiger was, as its name suggests, once commonly found in gardens, but this species has declined by 92%. Until now, I’ve only ever encountered them in the Highlands of Scotland, so it’s a shock to spot an individual among the nectaring red admiral and peacock butterflies.

As my shadow falls across it, its giraffe-patterned brown and cream forewings flick up and it flashes a warning with its vermilion hindwings. At the same time, it exposes a fringe of red hairs at the base of its head. This conspicuous colouration isn’t an empty threat: the moth can secrete an irritant liquid from two glands at the front of its thorax and its body fluids contain neurotoxins – enough to put off the hungriest potential predator.

I step back and watch as it flits up and over the fence, wondering when, or indeed if, I will ever encounter another of these bold beauties on my home patch.

Overlooked and unloved: how a global project could unlock the world of parasites

Welcome to the Biden administration: what do the key picks mean for Australia?

- April 10, 2020 0
Scottish fishermen are turning to food banks and welfare organisations, as the coronavirus crisis has led to plummeting demand for seafood, leaving many unable...

- April 2, 2020 0
Footage which appears to show Irish calves being beaten and kicked at a French feeding station has been published by animal campaign groups.The video,...

- November 3, 2020 0
A rich range of native crops and seeds is being nurtured in an effort to halt the country’s rapidly vanishing food diversityA small army...

- March 24, 2020 0
Most of us are familiar with the remains of cuttlefish, Sepia officinalis, large chalky internal shells that are washed up on beaches and sold...