Not a single day, not a single hour, can pass in these late summer fields without the catcalls starting. I have heard hobbies here, kestrels and sparrowhawks too, but no raptor’s cry gets under the skin like the mew of a young buzzard. It is the cat demanding to be let in, let out, or both, or neither.

The juvenile finds its plaintive voice during these fledging weeks between its secure nest among the trees and the open country of adulthood. The peal of an adult, a shout of exhilaration or abuse, is markedly different from the bleat of its offspring. Such is the desolation and utter helplessness in a juvenile buzzard’s throat that it tugs at the charitable ear of all who hear. I often find myself spinning, swivelling, searching the sky, to locate, pity, or tell it to shut up.

Up went the shout, only I didn’t need to turn for the source. Three fields ahead, a low-flying buzzard cruised past at telegraph wire height before alighting on one of the poles. A second bird had been lagging behind. The first waited for it to catch up, then rose from its perch and held the lead, landing on another pole a few hundred metres down the wires. Independent of flight, but tied by an invisible string, the youngster followed its parent, all the while yelling its discomfort. 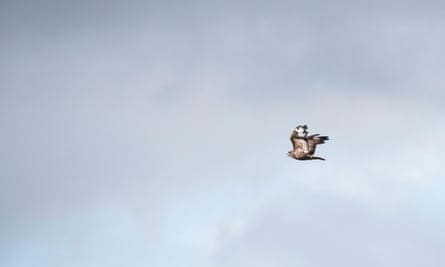 I lost this pair when the telegraph wires tracked east and the path swung away to the right, hugging the edge of a copse. Almost immediately, I stumbled upon a healthy-looking dead mouse, flat on its back, with its legs spread out in a “tickle my tummy” invitation. I was leaning over for a closer look at this tiny body with its still-bright eyes, when – “pee-ow!” – a clatter in the branches overhead released another buzzard into the air. In the rush of open wings and fanned tail, I saw the bird tilt its head towards me as if in reproach, before cutting away over the treetops and out of my sight.

Was this the second parent? And would it be back to claim its prey, feed its young, and hush its cries, if only for an hour?

Exclusive: livestock ships twice as likely to be lost as cargo vessels

- April 6, 2020 0
The United Nations' biodiversity chief has called for a global ban on wildlife markets - such as the one in Wuhan, China, believed to...

The Guardian view on Covid-19 and the climate: take back control | Editorial

- June 25, 2020 0
The colossal challenge facing human civilisation, of ending our reliance on fossil fuels in short order, has almost certainly been made harder by the...

‘An alarmingly familiar picture’: UK on course to miss most biodiversity targets

- October 15, 2020 0
The UK is failing on its long-term biodiversity targets and seeing "relentless" declines in wildlife, according to government data that shows public sector investment...

- September 2, 2020 0
Trash Free Trails project calls on walkers, runners and cyclists to take part in countryside clean-upsDom Ferris is a man who is building a...

A swallow puts an end to our isolation | Letters

- April 19, 2020 0
I hope the LSE academics suggesting that some folk are embracing more common pursuits such as football in their Who's Who entries (16 April)...
© Copyright www.thepoliticalplaybooks.com