There was a time when you could nearly always find a head of romaine lettuce in my crisper. The little black dress of salad greens, romaine stands up fine on its own in a classic Caesar salad and also serves as the perfect foil for stronger-flavoured greens or fillings in a sandwich.

But in the last couple of years, romaine has become a worrisome food in the US. Since 2018, outbreaks (since declared over) of E coli linked to leafy greens – primarily romaine lettuce – have sickened 474 Americans, led to 219 hospitalisations, and left six dead, The Centers for Disease Control and Prevention reports.

And, although the links are still unclear, the finger of blame is now falling on cattle and dairy operations found near areas where leafy greens are grown.

“Whenever you have an E coli outbreak in any produce, and you do a long enough investigation, eventually you will bump into a cow,” says Richard Raymond, former undersecretary for the US Department of Agriculture.

Bumping up against cows

Romaine from both Yuma, Arizona, and Salinas, California, the areas where the vast majority of leafy greens eaten in the US are grown, has been linked to E coli outbreaks in the past couple of years. The two regions have one crucial feature in common: produce growers and livestock operators share the land. Wind, water, or even wild animals may carry E coli from manure to the produce fields. 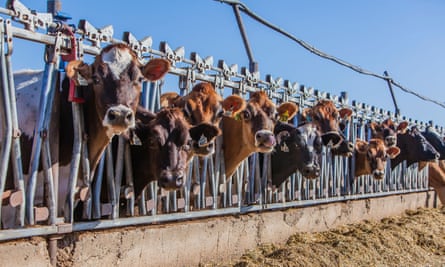 The virulent E coli O157:H7 strain behind the deadly outbreaks occurs naturally in the digestive tracts of many farm animals and is nearly ubiquitous on cattle farms and feedlots. When the bacteria infects humans, it can cause diarrhoea, fever, abdominal cramps, nausea, vomiting and, in some cases, complications such as hemolytic uremic syndrome, a form of kidney failure.

Traditionally, E coli infections were thought to be caused primarily by undercooked beef. Then a deadly outbreak linked to baby spinach in 2006 revealed that people were also getting sick from contaminated greens. Federal and state investigators traced the source of the outbreak to a spinach field leased from a rancher who grazed Angus cows on the rest of the property. The strain of E coli implicated in the outbreak also turned up in water and manure on the ranch.

Investigations into more recent outbreaks evoke a sense of deja vu. After the 2018 E coli outbreak linked to romaine grown in Yuma, Food and Drug Administration (FDA) investigators found the same strain of bacteria in an irrigation canal adjacent to a feedlot holding more than 100,000 head of cattle. The following year in Salinas they discovered a strain of E coli in a mixture of mud and manure on a cattle grate uphill from the romaine fields. They found other other strains of virulent E coli in water and soil nearby.

The bacteria could have travelled from cow manure to the romaine any number of ways – through wind, water runoff, wildlife, farming equipment, vehicles, or irrigation water, according to a spokesperson for the FDA. But, he says, “our investigations so far have not confirmed a definitive source or route(s) of contamination of the romaine fields”.

We never seem to get a smoking gun. Clues, but not the exact route by which the outbreak happened

It’s frustrating, says Michele Jay-Russell, a leafy greens researcher and programme manager for the Western Center for Food Safety at the University of California Davis. “We never seem to get a smoking gun. Clues, but not the exact route by which it happened.”

Billy Gatlin, executive vice president for the California Cattlemen’s Association, argues that the case against cows is largely circumstantial: “E coli O157 exists in the environment absent of cattle.” Just because an animal in the vicinity tests positive for the bacteria doesn’t mean it caused the outbreak, he says. “Perhaps both the animal and the produce got contaminated by a third party.” He raises the possibility that wild pigs, which are known carriers of E coli, could have contaminated both grazing land and growing fields.

Without hard evidence, an FDA report on 2019’s outbreak advises growers to double down on existing safeguards – surrounding fields with ditches or berms, for example, and increasing the distance from animal operations.

“All those steps are really important,” says Sandra Eskin, project director for food safety at the Pew Charitable Trusts. But, she says, they may not be sufficient. She references a photo in the FDA report of cows grazing on a hillside above a leafy green field: “You look up at the hill and I think the problem is staring right at you.”

Keeping salads clear of the cows

The US government has dragged its feet on regulations to improve the safety of the water used to irrigate crops. Feedback from farmers across the country was that the original regulations were too difficult and expensive, and would be “a nightmare” to implement, says Stephen Ostroff, who left the FDA in 2019 after serving in multiple high-ranking positions, including acting commissioner. He says it seems clear that the E coli O157 outbreaks were related to agricultural water, “but you can’t put in place a regulation that people can’t comply with”.

In the meantime, the produce industry has made changes voluntarily. Nearly all growers belong to a Leafy Green Marketing Agreement (LGMA), organisations overseen by the state which establish standards for food safety practices. 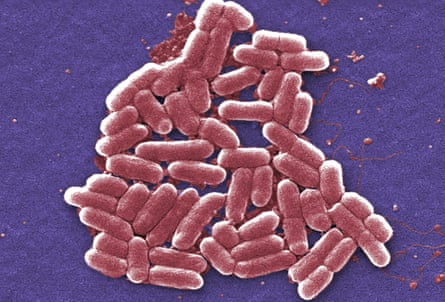 The latest LGMA guidelines call for the treating of all surface water used for irrigation 21 days before harvest, a requirement that Scott Horsfall, CEO of the California LGMA says was already being put in place last year. Recently, the FDA released a protocol for developing products to sanitise agricultural water.

But Ostroff is now advocating for strict standards that would require growers to sanitise irrigation water throughout the growing cycle. “It’s not easy to turn agricultural water into essentially water that is as clean as what comes out of your tap. There are also questions about the impacts on long-term soil health from treating all agricultural water. But the counter argument is that they can’t keep having these outbreaks,” he says. “Outbreaks are very expensive for the industry and the ramifications of them live on for a considerable time.”

The situation is further complicated by overlap between government agencies – it’s the Environmental Protection Agency, not FDA, that has the power to regulate runoff from livestock operations; while zoning falls to state and local authorities.

And a big part of the problem are the concentrated animal feeding operations (CAFOs) that house as many as 100,000 head of cattle in close quarters. CAFOs produce as much as 1.6 million tons of manure yearly – more than many cities – according to the General Accounting office. “That’s a lot of cattle waste that’s a potential source of problems,” says Ostroff.

“I know that the FDA has been struggling to get the beef industry to really sit down with them and try to work up solutions that deal with the proximity of these operations near where fruit and vegetables are raised,” says Tony Corbo, senior lobbyist for the consumer advocacy group Food and Water Watch.

With more than 40 E coli outbreaks since investigators connected the dots between cows and contaminated lettuce nearly 15 years ago, it’s past time for talking, says Raymond. “All this is too little, too late as far as I’m concerned.”

Romaine is right up there with oysters

Will I start stocking my fridge with romaine again? Maybe. Those most likely to suffer serious complications from food poisoning are young children, the elderly, and people with compromised immune systems. As a healthy middle-aged adult, I’m at very low risk. And as Jay-Russell points out, contamination is rare. “It’s one of those low-probability, high-consequence events like an F5 tornado – it’s not likely to happen, but if it does, it’s devastating.”

However, until regulators and industry take concrete action, Raymond says he’s sworn off Caesar salad. “I like romaine lettuce,” he says. “But it’s right up there with oysters and sprouts and unpasteurised as far as I’m concerned – I just don’t need that risk.”

Protecting nature is vital to escape ‘era of pandemics’ – report

- June 22, 2020 0
The coronavirus outbreaks that have struck workers in meat-processing plants around the world are due to poor working conditions and living quarters in a...

- October 27, 2020 0
17m tonnes of carbon dioxide to be stored beneath the North Sea every yearAfter decades spent extracting fossil fuels from the UK’s North Sea,...

Return of the burbot: ‘great lost fish’ to be reintroduced to UK

- March 6, 2020 0
Forget dreams of wolves, bears or lynx - the next animal to be restored to the British countryside could be a river bottom-dwelling fish...

- June 22, 2020 0
The European Parliament has voted to establish an inquiry committee to investigate the transport of live animals across and out of the European Union. The...

- March 25, 2020 0
Nature is sending us a message with the coronavirus pandemic and the ongoing climate crisis, according to the UN's environment chief, Inger Andersen. Andersen said...
© Copyright www.thepoliticalplaybooks.com