In 1925, ecologist Dayton Stoner drove 632 miles through Iowa, making a note of all the dead animals he saw en route. There were 225 pieces of roadkill in total, including red-headed woodpeckers, painted terrapins and blue racer snakes – once-common species that are now rare. The paper, called The Toll of the Automobile, was the first study of “road ecology” – a growing area of research that looks at the many ways tarmac dissects habitats.

In Britain, dead pheasants, foxes and badgers are common roadside sightings, but much of the environmental damage is hidden and hard to measure – roads fragment habitats and damage them through noise, chemical and light pollution. There are an estimated 28m miles (45m km) of paved roads on our planet, set to increase to about 43m miles by 2050, according to the International Energy Agency.

Nearly 100 years after Stoner’s research, the first landscape-scale study to look at how roads affect birds suggests they cause “large-scale simplification of avian communities” in Britain. Roads are so ubiquitous that we often forget about their negative effect on wildlife, but the findings of the new study, published in Nature Communications, are a cause for major concern, says lead researcher Dr Sophia Cooke, an ecologist from Cambridge University.

We’ve covered huge swathes of the country in tarmac; it would be amazing if it wasn’t having an effect

Britain has 247,000 miles of road – which could wrap around Earth almost 10 times – with more planned for the coming years. It is one of the most road-dense regions in the world, with over 80% of land falling within half a mile of a road. Yet there has been little effort to mitigate the impact of roads on wildlife, says Cooke. “It’s astonishing that this is something that hasn’t been thought about already,” she says. “We’ve covered huge swathes of the country in tarmac; it would be amazing if it wasn’t having an effect.”

Cooke’s team looked at the abundance of 75 bird species at 20,000 sites across Britain using data from the UK breeding bird survey and found that 63% showed strongly significant variation in abundance with increasing road exposure. Experienced volunteers (who can identify birds by sight and sound) counted birds early and late in the breeding season, recording everything within a 1km square. The impact of roads – such as noise, wildlife-vehicle collisions, chemical pollution and visual disturbance, including artificial light – could be detected up to 700 metres away. In total, more than 70% of Britain falls within this range, as well as 40% of its protected wildlife sites.

Researchers found that birds such as common gulls, pigeons and blackbirds, which are common in cities, are doing better along roads at the expense of rarer, specialist species, such as yellow wagtails and skylarks.

Cooke says: “The first thing I spotted was that the birds that seemed to be in higher abundance around roads are all the birds that turn up to my feeder in the garden. They are the birds that come into towns and cities, so they clearly are presumably able to tolerate human disturbance more.” 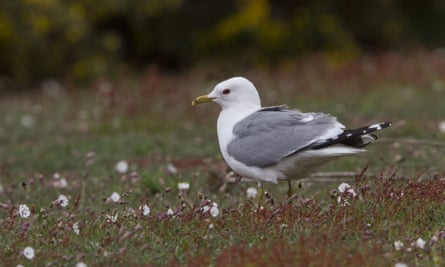 Shelducks were the most negatively affected by roads, with an 83% decrease, followed by the greylag goose, with a 67% decrease. Migrants such as the wheatear (-53%), reed warbler (-52%) and willow warbler (-20%) generally had lower abundance around roads, perhaps because they are only here for parts of the year so struggle to acclimatise to the disruption. Smaller-bodied birds were generally negatively affected by road noise. This could be because they have quieter songs or are more likely to be hit by vehicles, but more research is needed to understand this fully.

Cooke says: “There was a phylogenetic pattern throughout – a lot of the warblers declined in abundance around roads, while finches increased. The wetland birds were clearly a group that came out as being more negatively [affected by] roads, but it’s hard to know exactly why that is … I would argue that it is most likely avoidance of noise.”

If you walk alongside a busy road and you’re trying to have a conversation, you have to shout to be heard. It’s exactly the same for birds

Birds that dislike roads have limited alternatives. Typically, we think of an “urban footprint” as belonging to towns and cities that feature a large number of buildings, but if the areas around roads are included in that definition, it would cover most of the country. If road-building continues, this could cause extinctions in the UK and other road-dense countries in the future, the study found.

If only motorways and A-roads are considered, 81% of species are found in lower abundance, suggesting there is a threshold of noise above which few birds can cope. “If you walk alongside a busy road and you’re trying to have a conversation, you have to shout to be heard,” Cooke says. “It’s exactly the same for birds. They struggle to communicate over road noise, suffer increased stress and can’t hear predators.”

However, the relationship between roads and birdlife is complex. Out of the 75 bird species in the study, 77% varied with road exposure, but the biggest surprise, say researchers, was that nearly half of them appeared to have higher population densities close to roads, suggesting that roads could have a positive impact on certain species. 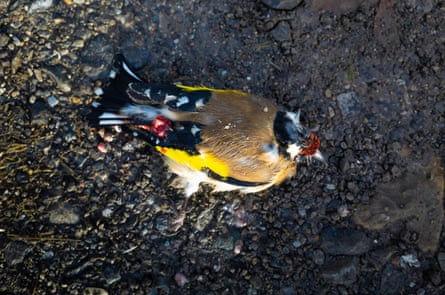 In Britain few natural, wild habitats remain, and scrubby bits of land alongside highways might therefore be an attractive place to settle for many birds – much better than surrounding agricultural land, or fully urban areas. Roads also provide grit and warmth. Scavengers such as red kites may benefit from picking up roadkill, and power lines and fences make useful perches. Litter also accumulates on verges, which could attract birds such as the common gull.

That does not mean, however, that these species are benefiting from their proximity to roads. A study of roadkill rates in Europe found nearly 12 common blackbirds are killed per kilometre of paved road per year. In total about 194 million birds are killed each year on European roads.

Roads may be acting as “sink habitats” that simultaneously attract and negatively affect species. Although these habitats are perceived as high quality because of the prevalence of shrubs and trees, birds there may not be thriving, says Cooke. Living near roads is linked to health problems in humans, including lung damage and an increased risk of dementia, but the effects on wildlife are often overlooked and require more research.

Cooke says: “The overall finding that more common birds are seen to be in higher abundance around roads, possibly replacing already rare species, is a cause for major concern. If that’s happening around all our roads, then that’s almost the whole country. That’s a huge area in which already rare species are possibly struggling even more.”

Dr Manuela Gonzalez-Suarez, a lecturer in ecology and evolutionary biology at the University of Reading, who was not involved in the study, praised its robust statistical approach. She was particularly interested in the way it challenged the simple notion that roads are bad for wildlife. “It is possible [that] some species benefit indirectly, for example, because their competitors are more affected by roads than they are, so near roads with less competition, they have an opportunity to flourish,” she says. “Of course, even those that apparently benefit from roads may still pay a price.”

The study highlights that avian winners and losers are not confined to areas where roads are being built for the first time, such as in the Amazon, but also in landscapes with a long history of development, says Dr Alexander Lees, senior lecturer in conservation biology at Manchester Metropolitan University.

Lees, who was not involved in the study, says: “In the British Isles, roads have been established for millennia but remain damaging to many bird species of conservation concern. The government needs to rethink plans to expand the road network and should rein in not only major roads but also the smaller ones – such as moorland tracks – which are creeping across our wilder spaces, leaving them forever scarred.”

In March, Rishi Sunak announced plans to build 4,000 miles of new roads by 2025 as part of a GBP27bn programme that the chancellor described as “the largest ever investment in English strategic roads”. Conservationists want the government to rethink the strategy, instead encouraging people to use public transport, walk or cycle.

Flexible working schemes would also reduce road use, says Gonzalez-Suarez. “Covid-19 has shown us that remote working and virtual meetings can work. We may not want to always stay at home, but even working from home one to two days a week would mean fewer cars on the road,” she says.

The government’s proposal to ban the purchase of combustion-engine vehicles by 2035 would reduce air pollution from roads and, to a lesser degree, noise pollution. Using smaller, aggregate material for the asphalt (which is being done on the A14), or adding rubber from old tyres would also reduce noise produced when tyres meet tarmac. Noise barriers, underpasses and bridges for wildlife, as well as reducing speed limits, would also help.

“Lockdown gave us a taste of a quieter world, with the lowest levels of transport-related noise pollution in decades. Perhaps that could be a preview of the future, rather than just a glimpse of the past,” says Cooke. 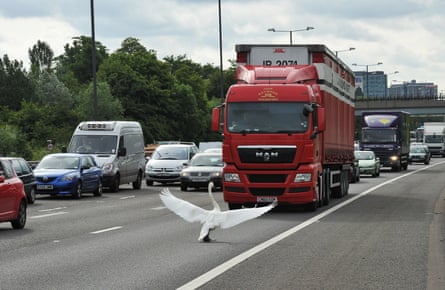 As well as reducing noise pollution, improving the habitats around roads is one of the most significant things that could be done to help nature in the UK, says Ben Phillips, a PhD student at the environment and sustainability institute at the University of Exeter.

These strips of land can have an abundance of wildflowers which are often missing from the wider countryside, and they make up a large area of the UK given the vast extent of the road network. It is relatively simple to improve road verges because they are owned by local government, compared to making changes to farmland, which is owned by many thousands of individuals. “The study teaches us that we need to better appreciate the strong influence that our vast road network can have on our natural environment, and the need to take a serious look at mitigating this,” says Phillips.

The results of this study are not just pertinent for road-dense countries such as the UK. Dr Marc-Andre Villard, an ecologist from Mount Allison University in Canada believes a failure to address the effects of road networks could contribute to the simplification of bird communities across the world.

“This study may represent a harbinger for more responsible land development,” he says. “We will have to design landscapes, including road networks, more wisely in the future. The pandemic has shown that under a major threat, humans can restrict their movements. Considering the importance of protecting large, roadless areas for the benefit of biodiversity, we might be more likely to accept the resulting constraints on our movements.”

From bamboo to barbecues: the cargo caught up in Ever Given legal battle

- June 11, 2021 0
Ship cannot sail out of Egyptian waters as authorities detain crew and cargo until owners pay for blockagesLemons, bamboo shoots and tofu sit in...

A river used to run through it: how New Mexico handles a dwindling Rio...

- January 12, 2021 0
The Rio Grande used to flow freely, but now in Las Cruces, humans, fish and plants are vying for water in the arid landscapeImagine...
© Copyright www.thepoliticalplaybooks.com