The Greens swept to their best-ever results in the 2019 European elections. Winning nearly 10% of seats, the group were billed as kingmakers in a more fragmented European parliament, as the two largest groups, the centre-right and centre-left, saw their decades-old dominance collapse.

More than a year on, the European Union has adopted its greenest-ever agenda, with the promise of net-zero emissions by 2050 and a European Green Deal to transform the economy, underpinned by a target to spend nearly one-third of EU funds on climate change and the environment.

But even the staunchest Green politician does not try to grab the credit. The green cause has been lifted by growing awareness of the unfolding climate emergency, as well as the school strike movement led by Greta Thunberg.

“We have a [European] commission that at least has green ambitions like no other commission before,” said Philippe Lamberts, co-president of the Greens in the European parliament.

“We are strong in the European parliament but don’t overdo it,” he added. “With 10% you get influence, but they can still decide to govern without you and that is what they basically did.” Despite being wooed with the European Green Deal, the Greens declined to support the commission led by centre-right Ursula von der Leyen. 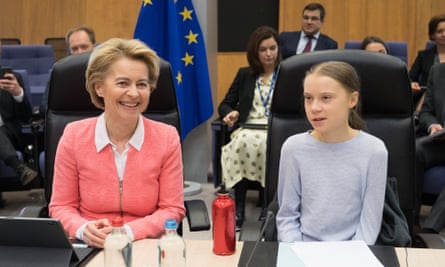 Green strength is also overstated by their structure in the European parliament. About one in six members of the Greens-European Free Alliance, to use their full name, belong to non-green parties, such as the Czech Pirates or Catalan nationalists.

And the Greens are far from the only party wanting to save the planet. The chair of the European parliament’s influential environment committee, who was responsible for a resolution declaring a climate emergency, is allied to Emmanuel Macron, the French president. Pascal Canfin, a former head of WWF France, once sat as a Green MEP, but joined forces with the French president (although not his party, La Republique en Marche) when re-elected to Brussels and Strasbourg.

Green MEPs, nevertheless, “punch above their weight when it comes to public attention and agenda-setting”, said Sophie Pornschlegel at the European Policy Centre. Green MEPs have won influence by mastering specialist policy briefs, such as the former Luxembourg MEP turned energy minister Claude Turmes, who co-wrote EU law on renewables, or Heidi Hautala of Finland, long-time transparency campaigner, or Sven Giegold of Germany, a one-man mission against tax avoidance and government sleaze.

Greens are also now sitting around cabinet tables in five of the EU’s 27 member states, where they have forced the pace on climate laws.

As the price for entering a centre-right/liberal coalition, Ireland’s Greens secured a promise to cut greenhouse gas emissions by an average of 7% a year. Finland’s left-green coalition has pledged to go carbon neutral by 2035, while Austria’s Greens, the junior coalition partner, secured a similar target for 2040. Sweden’s Social-Democrat/Green government has promised “an entirely fossil-free welfare state” by 2045.

But green influence only goes so far. Austria’s Greens accepted some hardline policies that were hard to swallow for grassroots activists, such as extending a headscarf ban in schools. And Greens’ limited sway was obvious at a landmark EU summit in July, when leaders agreed a coronavirus recovery plan. Some of the “frugal” governments taking the toughest line against EU spending were those with green coalition partners, such as Austria, Finland and Sweden.

“They did whatever they could,” said Lamberts, who points out there is not a single EU leader from a Green party. “In a crucial decision place you’re not present… We try to make up for it with a stronger stance with organised civil society. We try to take the more traditional forces in a sort of pincer to basically force [governments] to go in directions they won’t go spontaneously.”

Greens are not the only pan-European movement tied up in political knots – Swedish and Finnish Social Democrats in those frugal governments did not make common cause with their Spanish and Portuguese allies. And one of the biggest summit rows was between two leaders from the same political family – Macron and the Dutch prime minister, Mark Rutte.

The other big problem for Greens is their absence in southern, central and eastern Europe, apart from a few patchy successes, such as the election of a green mayor in Budapest or the return of an independent Portuguese MEP, who sits with the Greens.

Despite these green shoots, the party is “still very much a north-western phenomenon”, said Pascal LeTendre-Hanns, who monitors European politics at Hanbury Strategy. “In southern Europe the focus has been so much on the economy and jobs, it has been hard for green parties to get much of a foothold,” he said, adding these countries lack “the historical legacy of anti-nuclear movements that helped push the Greens” elsewhere.

In central and eastern Europe, voters are also very focused on the economy, but there is “more anxiety about the energy transition” because of high levels of coal and gas use, LeTendre-Hanns said. “Without a significant reinvention of what green politics is in these countries it’s hard to see green politics gaining much of a foothold.”

Lamberts contends the Greens could gain in Italy in the 2024 European elections from voters disillusioned with the Five Star Movement. His optimism is not borne out by recent opinion polls, which show Italy’s Europa Verde almost invisible at 1%. But his main hope is for France and Germany, after Greens won major French cities in recent local elections and continue to be touted as a coalition partner in a future German centre-right/green government.

The MEP hopes the Greens could win in triple figures in the 2024 elections. “If we are not able to do more than 100 next time, then who are we? If anything, Covid adds to the awareness of the need to change policy.”

Nothing is guaranteed, but Petros Fassoulas, secretary general of the European Movement International, thinks the door is open. “If they are able to prove that they are effective policymakers as well as campaigners and if other parties are not successful in co-opting the policies for their own benefit, I believe we can see a stronger trend – not least because the questions around climate policies and environment are not going to go away.”

- February 15, 2021 0
The blossoms grow in eastern Australia, from the Blue Mountains to north-eastern Victoria. Their seeds can lay dormant for years, requiring exactly the right...

Biden Signs Off on Tighter Eligibility for Stimulus Checks

- October 20, 2020 0
Critics say move an example of ‘cosy relationship’ between industry and regulatorOne of the most senior executives at the Environment Agency is leaving to...
© Copyright www.thepoliticalplaybooks.com