When Barry Curtin was a young boy, he would cycle alone along the River Bride in search of a soft mossy stone on which to sit and fish. The river is a tributary of the Blackwater, which flows through Cork, Kerry and Waterford, and it has a sacred significance: its name comes from Brigid, the flame-haired pagan goddess of water. “It was an incredibly diverse place,” says Curtin. “The cleanliness of the water, the damselflies, the dippers – it was full of life.”

But Curtin, a retired teacher, hasn’t fished the river for years. He is appalled at the extent of water pollution, which he says has all but killed the rich diversity of aquatic life. “If you stand in Fermoy and look at the Blackwater at low water level, you can see the slime. There’s no doubt about it – we’ve crossed a threshold. It’s saturated with pollution.”

If you stand in Fermoy and look at the Blackwater at low water level, you can see the slime

It’s a wretchedly familiar story, because Ireland is experiencing a water pollution crisis. A lack of investment in managing sewage is part of the story: half of urban wastewater treatment plants don’t meet minimum EU standards, while raw sewage from 77,000 people across Ireland flows into the environment every day. Nutrient runoff from sitka spruce plantations also has a negative impact.

Rivers are increasingly polluted with phosphorus and nitrogen, and scientists say this tracks the rise in cow numbers and fertiliser use, especially in the more intensively farmed areas of south and south-east Ireland. Late last year, data released by the Environmental Protection Agency showed that the number of pristine rivers has fallen from 575 in the 1980s to an all-time low of just 20 today.

The Blackwater catchment encapsulates the problem. Right in the heart of dairy country, this is a region that has experienced a surge in milk production, because of the Irish government’s policy of intensification since the abolition of EU milk quotas. Global dairy companies have made immense profits from this expansion, but some scientists are increasingly alarmed at the rapid impact it is having on water quality.

“I have huge sympathy and admiration for farmers, especially those with smallholdings, who are trying the best they can. But a government-supported policy of intensification is not the way to protect and restore water quality,” says Ken Irvine, professor of aquatic ecosystems in the Delft Institute in the Netherlands, who has spent decades studying water quality in Ireland. “As long as we say: ‘compared with other countries we are somehow better,’ we’re not solving the environmental problems, and frankly it misses the point.”

Ireland was flat broke when the government’s huge export-led intensification plan – Food Harvest 2020 – was launched. A series of banking scandals and lax regulation had crippled the economy. On the same rainy day in July 2010 that Ireland’s credit rating was downgraded by Moody’s, the government announced that it had found a way out for the battered economy: Ireland would become a global player in food production. Powerful figures from the agricultural industry were asked to draw up an expansion plan, and millions of euros of public money would fund it.

Under the government’s plan, milk production would increase by 50% and thousands of new rural jobs were promised. Farmers were told to expand their herd size, and sow their fields with a monoculture of rye grass as a low-cost feed for their cows. (Rye grass won’t grow sufficiently without substantial amounts of fertiliser, and farmers were set on a course where they couldn’t grow grass without it.) 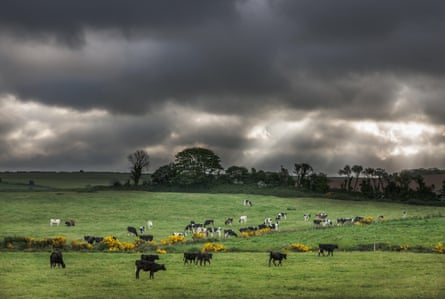 It came with a promise that the environment would be valued and respected. Oscar-nominated actor Saoirse Ronan was drafted in to front a stirring advert about sustainability and Ireland’s green credentials. But what has emerged a decade later is a more troubling reality.

“The environment wasn’t taken very seriously,” says ecologist Alan Lauder, who was the only environmentalist on the 30-strong committee who devised the plan. “There was an opportunity to do things in a more sustainable way for farmers – where farming and nature could have gone hand in hand to deliver real public benefits for public money. It’s clear it hasn’t delivered for the Irish environment.”

In Courtmacsherry, a picturesque seaside village in Co Cork, the emergence of foul-smelling green algae-enriched tides is strongly linked to intensive dairy expansion in the area, according to scientists at the National University of Ireland, Galway.

“Dairy herds have increased significantly,” says one of the scientists, Liam Morrison. “We know that Courtmacsherry is one of the more intensively farmed areas in the country. We can measure the levels of nitrogen and phosphorus in the water and see that intensive agriculture is significantly contributing to the algal blooms in the estuary.”

Morrison says that the same patterns can be seen in the nearby Blackwater estuary. “We need to work harder to keep nutrients out of the water to achieve a good balance between agronomic and environmental gains.”

Since 2010, carbon dioxide, nitrogen and ammonia emissions from agriculture have increased. Dairy cow numbers have gone up by 400,000 in the past five years – Cork has the highest number in the country – to 1.5 million. 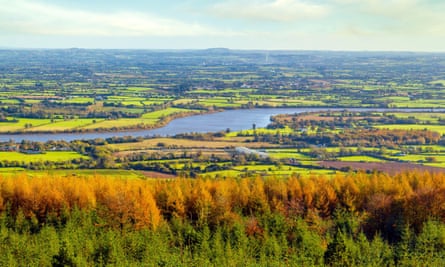 “The number of animals is far too great,” says Dan Ryan, a beef and dairy scientist who worked for years at Teagasc, the state agency for agri-food research. “Ultimately it’s affecting water quality. It’s shocking.”

Ryan says that the environmental price being paid for dairy expansion is not acceptable. “We have driven a system that is compromising the environment. On the Dingle peninsula on the south-west coast, smaller farmers are disappearing. Large-scale dairy production is being pushed – which pushes individual small dairy farms to a scale which is going to wipe them out.”

Nutrient pollution isn’t the only problem. Last month, scientists from Trinity College Dublin reported that veterinary medicines, mainly from intensive poultry farming, had been detected in groundwater for the first time. The medicines – primarily antibiotics – are added to chicken feed as a way to treat a painful parasitic disease of the intestines. Since more than a quarter of Ireland’s drinking water supply comes from groundwater (that figure jumps to 75% across the EU) there are concerns that this may drive antimicrobial resistance, and pose chronic toxic risks to human health.

Many individual farmers are trying to move away from the extreme model of intensification, to regain control over the way they want to farm. Donal Sheehan, a dairy farmer who lives in the River Bride valley in north Cork, believes that the way forward for future generations is to take an ecological approach to farming. In 2018, he set up an EU-funded project that has brought together intensive lowland farmers in his catchment. They’ve changed the way they farm to restore life back to their farmland and the river, while maintaining their profits. It’s a tantalising example of an alternative future for farmers.

Getting Teagasc to step back from pushing chemical fertilisers is a first step. “We need to limit artificial nitrogen use,” he says. “That would have a huge impact on water quality.”

Thanks to the work of these farmers, Curtin may yet see the Bride and the Blackwater brought back to life. Until then, he regularly travels to the lakes in the west of Ireland to get his aquatic fix.

“It’s delightful in Connemara,” he says. “It reminds me of what our environment was like in Cork during the 1960s. All the indicators of life are still there.”

Bank of England statement on purchase of long-dated bonds

People are struggling to pay their energy bills – here’s a simple idea that...

Vaccinated Brits could be back on Europe’s beaches soon – minister

- June 22, 2021 0
© Reuters. People wear protective masks as they walk with suitcases through the city centre, amid the outbreak of the coronavirus disease (COVID-19) in...