Poland’s fur farms could be in their final year in operation if a bill banning production of fur clears legal hurdles next month. And France looks set to follow suit.

The Polish bill, dubbed “five for animals” (because it has five main objectives, including the ban) was tabled in early September, much to the dismay of fur farmers. The bill was announced as undercover footage from the largest fur farm in Poland was released, which campaigners said appeared to show “cannibalism, aggression, self-aggression, open wounds and paralysis of minks’ limbs”.

The bill, which was put forward by Poland’s ruling right wing coalition, led by Law and Justice (PiS), seeks to ban breeding animals for fur in just one year following the law’s entry into force. PiS’s chair Jaroslaw Kaczynski, a self-confessed animal lover, announced the bill himself.

“Fur animals are typically killed in November and December, so we hope this year’s cull might be the last, depending on when the law will take effect,” said Anna Izynska of Otwarte Klatki (Open Cages), the Polish office of the international NGO campaigning for the end of fur farming and trade. “We are happy because that’s what we have been fighting for the past nine years.”

Minks are by far the biggest group of animals on Polish fur farms. There are more than six million minks on farms countrywide, 94% of the total number of animals kept for fur, according to data from Poland’s chief veterinary inspectorate compiled by the factchecking website Konkret24. Other animals include rabbits, foxes, raccoon dogs and chinchillas. 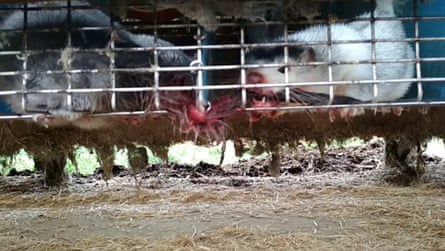 The newly released footage, which was published by the leading Polish news website Onet.pl, was filmed by an activist over two months using a phone and a hidden camera. Izynska said that it shows numerous cases of “cannibalism, aggression, self-aggression, open wounds and paralysis of minks’ limbs”. In the video, the activist also talks about a “hospital” on the farm, where wounded or ill animals were placed but without receiving any help, bar an occasional pouring of antiseptic powder over their wounds.

Fur producers, however, are furious and accuse the activists and the PiS government of conspiring to kill an entire industry on which thousands of livelihoods depend.

“The Ukrainian activist provoked incidents that never took place on the farm before,” said Szczepan Wojcik, brother of Wojciech Wojcik, who owns the farm in the video. Szczepan Wojcik, who heads the Institute of Agricultural Economy (IGR), an agricultural thinktank, also said the entire animal welfare bill – which also targets ritual slaughter, seeks to ban animals in circuses and to strengthen animal rights NGOs’ control powers – is a deadly threat to much of Poland’s agriculture.

“[This is] an unprecedented situation, which, in the future, could lead to banning any branch of production due to ideological reasons,” the IGR said in a statement on the bill.

Szczepan Wojcik told the Guardian: “We are never going to agree to the fact that the PiS government is trying to take what we’ve worked all our lives away from us. We have invested money, we have loans, and it’s all legal business. What the government is doing is basically expropriating us and for that, I am sure they will lose the next election.”

“We demand that the government compensates us for the ban, just like the governments in the Czech Republic, Norway, or the UK did. So that we can pay back loans and switch to other business.”

Fur farming has been in decline in Poland, not least because some markets it exports fur to – such as the UK – have seen a considerable reduction in demand. Fur imports from Poland to the UK peaked at about GBP8.4m in 2017 but declined almost sevenfold to GBP1.2m in 2019. The UK is now considering an outright ban on fur sales.

“More and more retailers on the British high-street now have fur-free policies. This reflects the British public’s general dislike of fur, with the latest opinion polls showing that 93% of the British public say they don’t wear fur,” said Wendy Higgins of the UK office of Humane Society International (HSI), an NGO that has been campaigning against the sale of fur in the UK. 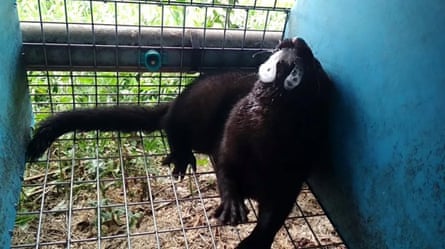 Out of 810 fur farms in Poland, the ban would affect about 700, data from the chief veterinary inspectorate suggests. Much to the outrage of animal rights’ activists, the ban does not cover breeding rabbits.

Due to different methodologies used in reports, it is not exactly clear how many people Poland’s fur farming industry employs. The numbers range from between 3,000 and 4,000 to about 13,000. Even the highest figure represents no more than 0.18% of Poland’s labour market.

Support from the opposition means the bill faces little resistance. The Senate will review it in early October, and in theory it could become law by the end of that month. Poland would then join Austria, Croatia, the Czech Republic, Luxembourg, the Republic of North Macedonia, Serbia, Slovenia and the UK, which have all banned fur farming. France now plans to follow suit, with the minister for ecological transition Barbara Pompili announcing today the end of mink fur farming in France, with the country’s last four remaining fur farms to close no later than 2025.

Shark tourism and conservation off South Africa – in pictures

The green cleaner: 15 natural ways to spruce up your home – from nettles to rainwater

Thousands of baby turtles released into sea off Bali

- August 8, 2020 0
More than 10,000 baby turtles were released into the sea off the Indonesian island of Bali, as part of conservationists' attempts to boost the...

- May 5, 2020 0
From the vast plains of the Masai Mara in Kenya to the delicate corals of the Aldabra atoll in the Seychelles, conservation work to...

From dusted-off bikes to electric dreams: UK green economy booms on back of Covid-19

- December 24, 2020 0
Storm Bella is due to hit parts of the UK on Boxing Day after dozens of homes and businesses were flooded following heavy rain. An...

Oysters return to Belfast Lough after more than 100 years

- December 26, 2020 0
Researchers surprised by reappearance of species without aid of reintroduction schemeNative oysters have unexpectedly returned to the shores of Belfast Lough after more than...
© Copyright www.thepoliticalplaybooks.com