Once the sun has set, there’s a chill in the air, but it’s still mild enough to leave my bedroom windows wide open at night. As soon as I switch on the lights, the glow acts as an irresistible invitation to every passing crane fly, moth, mosquito and midge, though they aren’t the only winged insects to be lured towards the light source – a phenomenon known as positive phototaxis.

It’s the slight iridescence of its translucent, reticulated wings that first draws my eye to the creature clinging to my ceiling lampshade. Climbing up on my bed for a closer look, I discover it’s a common green lacewing (Chrysoperla carnea). Just 1.5cm in length, it has a slender, pale pistachio-green body, long thread-like antennae and oversized eyes the colour of burnished copper.

Most lacewings perish after breeding, the next generation passing the bleakest months as dormant pupae in cocoons buried beneath undisturbed soil, but of the 43 species found in the UK, Chrysoperla carnea is unique, the only one of its kind to overwinter in adult form. 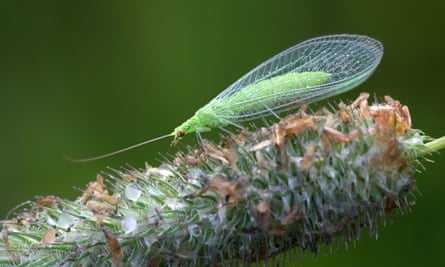 Its name is something of a misnomer as, in synchrony with the turning of deciduous trees to shades of red, gold and brown, these insects fade from vibrant lime to dull straw-yellow or pinkish-beige, reverting to green the following spring. This seasonal colour-change is likely an enhancement of crypsis, allowing them to avoid detection by potential predators while hibernating in decomposing leaf litter.

Perhaps because many gardeners take their tidying too far – eradicating the hollow plant stems, fallen leaves and log piles that provide natural nooks and crannies in which to hide – lacewings often find refuge in houses and outbuildings. Last autumn one cosied up in a crevice in my kitchen window frame, lying torpid until April when it emerged in search of a mate.

It’s possible to purchase purpose-built lacewing “hotels”, but this year I’ve made a shelter from an empty plastic bottle stuffed with a roll of corrugated cardboard. My motives aren’t entirely altruistic. I’ve hung it from a branch of my Victoria plum in the hope that, come spring, the residents will lay eggs and, once hatched, their voracious larvae – colloquially known as aphid lions – will devour the inevitable infestation of sap-suckers.

- April 23, 2020 0
Microsoft drew widespread praise in January this year after Brad Smith, the company's president, announced their climate "moonshot". While other corporate giants, such as Amazon...

Britain beyond lockdown: what we learned from two weeks on the road

- July 6, 2020 0
Britain is crying out for a better normal. Communities across the country are emerging from lockdown with a new sense of what is possible...

- July 3, 2020 0
It's said cod were once so plentiful in New England they would throw themselves into a boat. It's said you could walk across their...

- December 23, 2020 0
The evidence to the contrary comes from the Morrison government’s own dataJust as people in the Middle Ages mistakenly believed the sun revolved around...
© Copyright www.thepoliticalplaybooks.com