Americans are currently deciding who they think will best serve them as leader. While animals don’t emerge from polling places with the “I Voted” sticker, they make collective decisions about who’s going to take charge, too.

“If animals choose the wrong leader, then it has really dire consequences for them,” said Jennifer Smith, an animal behaviorist at Mills College in Oakland, California, who has extensively studied leadership among several species (including humans). Collective decisions are the “checks and balances” on non-human leadership.

Here are three species with distinctive – though also recognizable, from a human point of view – ways of picking which direction their society will take. 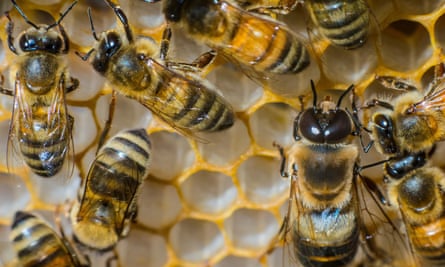 Each spring, beehives can get so crowded that the colony decides it’s time to establish a new home. “In honeybees, when a vote happens about when to move a hive from one area to another, it is very much a democracy,” says Smith.

The queen bee takes flight with about half the hive’s workforce and settles on a staging spot, perhaps a tree branch. From this vantage point, several hundred worker bee scouts search for an appropriate new abode. When a scout finds one, it returns to the group and performs a “waggle dance“. The more a bee shakes its stuff, the more promising it thinks the site it explored is, judged by factors such as its size, humidity and the density of surrounding flowers. If the bee’s dance is vigorous enough, other scouts will locate and assess the location – just as in, say, a presidential primary, candidates try to capture voters’ attention with alluring displays.

In the meantime, a new queen is maturing. A female honeybee becomes a queen based on what she eats in the first days of her life as a larva. Ultimately, about half the bees stay in the original nest with the new queen. 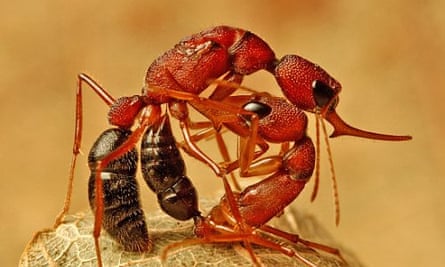 Indian jumping ants live in colonies in which individuals have clearly delineated roles. Worker ants build nests and keep them clean while a queen lays eggs to maintain the population. But when an Indian jumping ant queen dies, all hell breaks loose: prospective leaders face off in antennal fencing duels until the colony selects a new queen.

During this battle royale, which is clearly somewhat more hands-on than anything in the US democratic system, ants scuffle with other for months of heated conflict, and about a dozen queen candidates rise to the top. At this point, according to Discover Magazine, “their brains shrink, their abdomens fill with ovaries and their expected lifespans grow from a max of six months to up to five years.” This new group picks up the late queen’s scepter, turning to their newfound role as egg-laying machines. 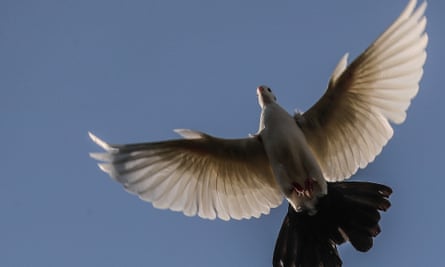 A freewheeling flock of homing pigeons might seem to move in near-perfect synchrony. But what happens if the bird leading the flock goes in the wrong direction? According to research at Oxford University, pigeons stage, ahem, a coo if their leader is not fit.

Using GPS trackers strapped on pigeon-sized backpacks, the researchers were able to unravel the nuances of pigeon flight. Pigeons rely on an internal clock to navigate. To interfere with the birds’ sense of direction, researchers placed them in a light-proof chamber that alters their perception of day and night. Their goal was “experimentally inducing confusion in a bird we had previously identified as a leader”, says study co-author Dora Biro, an animal behaviorist at Oxford University’s department of zoology.

Accordion to Biro, there are two main ways a leader can be overruled. First, the leading pigeon may itself realize that it is confused, and “step down” by falling back in the flock. Second, the rest of the flock may realize that there is something wrong with the leader and will opt not to follow it any more. “We don’t actually know which of these mechanisms was responsible for the rearrangement of the leadership hierarchies, but the overall effect is that the misinformed leaders were ‘deposed’,” she says.

If only erring human leaders were as easily correctable.

- May 25, 2020 0
Play Video 1:05 Eight chimneys at Victoria's defunct, coal-fired Hazelwood power station have been demolished. Built in the 1960s, they operated for more than half a...

- October 26, 2020 0
Paper suggests climate crisis reducing insects in lowlands and central jungle, as fruit-eaters not affectedBird species are in decline even in the remote parts...

‘Hijacked by anxiety’: how climate dread is hindering climate action

- October 8, 2020 0
You're browsing in a supermarket and fretting mildly about the air miles of some green beans. Or you're daydreaming of that island holiday you...

- March 12, 2020 0
How many people want dolphins killed? Apart from the psychopath shooting them in Florida, and the Japanese hunters slaughtering them every year in Taiji...

- September 3, 2020 0
It may just be the worst-kept secret in Australian fashion. The country doesn't process its own wool or cotton. Processing skills and infrastructure moved...
© Copyright www.thepoliticalplaybooks.com