Slumped in the darkness of a narrow corridor lies a pig with hopeless eyes. Each strand of hair is defined, and every line, wrinkle and crease on its body seems to express the cruel conditions of its life. The photo, by Finnish photojournalist Kristo Muurimaa, is just one of the many shocking images compiled in the photo book Hidden. Created by photojournalist and animal rights activist Jo-Anne McArthur, Hidden sheds light on industrial scale factory farms and slaughterhouses and is an indictment of the meat industry.

McArthur and 39 photographers from 16 countries who contributed to the book are unflinching and unapologetic about what they reveal. “My best images are those when I am up close with a wide angle: the calf in the wheelbarrow, being put into a crate; the rabbit, ears back, visibly next in line for slaughter,” says McArthur.

Joaquin Phoenix, who at this year’s Oscars used his acceptance speech for best actor to advocate for veganism, has written the book’s foreword. “The photojournalists represented in Hidden have entered some of the darkest, most unsettling places in the world,” he says. “The images they have captured are a searing reminder of our unpardonable behaviour towards animals and will serve as beacons of change for years to come.” 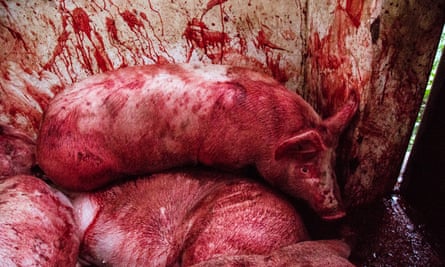 One image, by Polish photojournalist Andrew Skowron, reveals dishevelled chickens hanging by their feet from a conveyor belt of metal shackles, approaching human hands who will cut their throats. Like the rest of the book, it presents images of the short, confined lives of farmed animals from birthing pen to slaughterhouse floor. As Hidden contributor Stefano Belacchi puts it: “We must always remember that those animals portrayed in these photos will be dead when the public sees them. I feel a big responsibility when I think about that.”

McArthur has long used photojournalism to advocate for animal rights. “Animal photojournalism demands radical empathy and self-awareness,” she says. “Viewers must de-centre themselves and consider the world through the eyes of a different species, while holding the truth of humanity’s undeniable role in the story.” She also points out that in bringing these images to light, “it poses a fundamental threat to deeply embedded societal systems that continue, largely unchallenged. Seeking out these visual stories is itself an act of resistance.”

Hidden reveals in often bloody detail how little we know about what goes on within these windowless walls. Photographer Francesco Pistilli started covering the Italian meat industry eight years ago. “I found corporations have moved the animals indoors to prison-style plants in the middle of rural nowhere, far from the gaze of nervous consumers.” 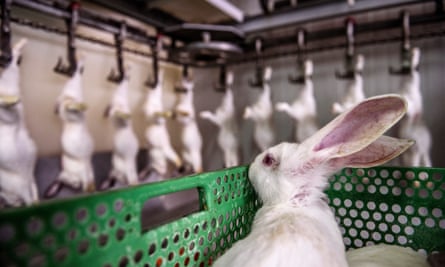 The stories within its pages are revelatory and brutal. They are proof of the emergency confronting animals globally, from industrial farming to climate change, and provide valuable insight into the relevance of animal suffering to human health. “I do this work because I want others to see what I see when I look into the eyes of an animal,” says photographer Louise Jorgensen. “To see that there is someone equal to you looking back from behind those frightened and pleading eyes. I capture emotion in eyes to understand that animals, like us, are emotional, sentient beings with the same capacity to feel joy, love, and to suffer immensely.”

While this particular photo book’s aim is driven by activism and a desire to see a change in the treatment of animals worldwide, contributor Aitor Garmendia insists the artistic dimension has not been lost: “I want the aesthetics of a photo and its beauty to catch the viewer’s gaze and thus serve to understand horror and injustice.” 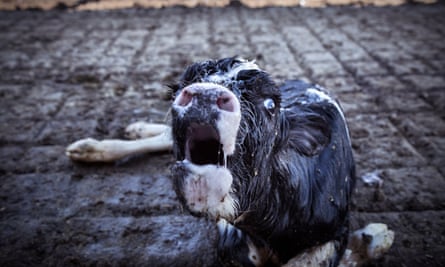 Hidden’s editors expect those viewers to be a varied audience, from animal rights groups, for whom some of the contributing photographers already work, to aficionados of documentary photography, as well as those among the wider public questioning the treatment of animals. McArthur plans to donate copies to politicians, lobbyists, policy makers, farmers’ groups and celebrity chefs, to raise the discussion about animal rights and welfare to a higher level of public concern.

She adds: “When I first laid eyes on the book Inferno by war photographer James Nachtwey, I immediately knew that I wanted to make a similar book for animals. To this day, Nachtwey’s images are globally recognised and used to enliven conversations about how we can and must do better for one another. My goal with Hidden is to achieve the same visibility about animal suffering.”

‘The Earth could hear itself think’: how birdsong became the sound of lockdown

The Guardian view on animal welfare: keep it up | Editorial

- September 17, 2020 0
Hunting, scientific experimentation, entertainment, the keeping of pets, farming, fishing, habitat destruction: there is no one story about the way that humans use animals...

- August 20, 2020 0
Hundreds of fishermen stood chest deep in the brisk Alaskan river. Each held a five-foot net attached to a long metal pole. The only...

Spring promises: things to look forward to, from chocolate bunnies to flower-filled walks

- August 13, 2020 0
The biggest reintroduction to date of the large blue has led to the rare butterfly flying on a Cotswold hillside where it has not...
© Copyright www.thepoliticalplaybooks.com