A five-inch stack of old Telegraph newspapers is perched on the front seat of the bashed-up Subaru, while in the back is a long stick for fending off cows. At the wheel is Ann Sevier, a 13th generation commoner whose family has lived in the New Forest since 1650.

“Hello everybody!” she yells to the livestock as she pulls up in the car. We are in Latchmore valley near Fordingbridge, where more than a hundred cows and horses have gathered in the cool breeze that tumbles off the surrounding hills, providing respite from biting insects (behaviour known locally as “shading”). It resembles a congregation of animals you might see around a waterhole, except the horses have letters branded on their backs.

The ponies are excited by our arrival, particularly one male who mounts another behind the car. The abundance of poo and tightly-grazed grass suggests this is a popular haunt. Livestock from four miles around come to stand in this cool valley during the summer months. “They’ve been doing that all my life and all my father’s life. They’ve probably been doing that since the last ice age. It’s just a question of knowing the land,” says Sevier.

In the evening, once the insects have quietened down, the livestock will move back up the hills to take advantage of the longer grass and graze into the night. This large-scale movement of herbivores is replicated in many valleys over the 219 sq miles (566 sq kms) of the New Forest national park, creating a scruffy mosaic of habitats. Free-roaming herbivores are ecological architects, and beyond the modern pressures of rising house prices, people leaving litter, and debates about over-grazing, this is a farming system that has changed little in 1,000 years. 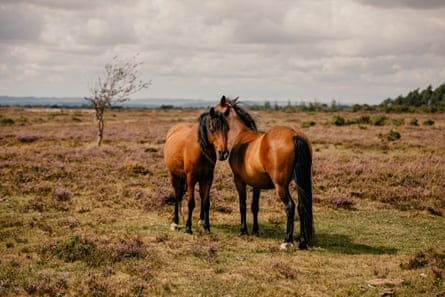 Like livestock, people are also wedded to this land and knowledge is passed down through generations. The right to be a commoner is attached to land and not bloodlines (perhaps why so many are resistant to moving out) and there are 700 New Forest commoners, some of whom have up to 300 livestock. Old institutions protect these practices – the Verderers’ Court deals with those who break forest law (by trespassing, for example), and New Forest ponies are still sold in guineas.

Unless you inherit, you cannot afford to be a commoner. We don’t make any money. It’s love

Commoners have a right to pasture, mast (acorns in autumn) and fuelwood. The rights to marl (clay to improve agricultural land) and turbary (cutting peat for fuel) no longer exist. These rights were officially laid out in the Commoner’s Charter in 1215 and more recently popularised in James Rebanks’s book The Shepherd’s Life about hill farming in the uplands. Men would typically go off and do contracting work while the women stayed and looked after the land and livestock so there have historically been more women commoners, a trend that continues today. Helping each other out and checking on each other’s livestock is part of the job.

Sevier, who is 70 next year (as she often remarks, surprised each time she says it), is as accomplished as any outback guide – she knows where the animals will be at what time of year depending on the weather. “I know exactly where the animals will be,” she confirms. Her 14 ponies are out on the commons from April to October and during that time she makes hay on her private land. As well as being an engaged commoner, Sevier is a member of the New Forest National Park Authority. “Everyone wants a bit of me. I’m never going to get my vacuuming done,” she says. 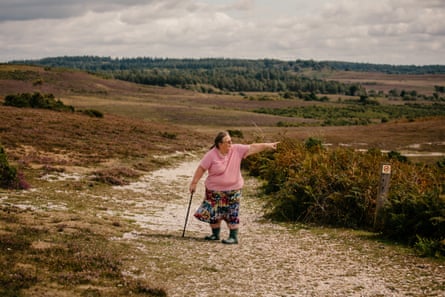 Overgrazing is an extremely contentious issue in the park. Under the Verderers’ Grazing Scheme (VGS), which is funded by EU Common Agricultural Policy grants, livestock owners receive money for putting livestock out in the forest. This has caused numbers to swell. More than 13,500 cows, ponies and donkeys have the right to graze commons in the New Forest, a 65% increase in registered animals since 2015. Chris Packham and some scientists have also spoken out about the issue of over-grazing in the park.

There are no books on it. I’ve had to learn to read the landscape

“It’s bollocks,” says Sevier. Before long she’s back in the Subaru, driving at breakneck speed out of the valley and up into the hills to look at heathland flowers and how long the grass is. Higher up, the landscape is dominated by heather and gorse and looks completely different to the short grass on the valley floor. We find a milkwort, sundew and an orchid and the grass is several inches long in boggy parts where livestock don’t graze. “These flowers indicate that the heathland is in good condition. You wouldn’t get these rare things if it wasn’t grazed properly,” says Sevier.

Like the rewilded Knepp estate, this landscape is scruffy and unkempt. Sevier dismisses “new” ideas coming from rewilding. “What they’re finding with rewilding is that you can have this amazing landscape full of species, if you let it do its own thing. We’ve been doing it for thousands of years, using large herbivores and letting them do their own thing,” she says.

In the coming decades Sevier says, the park will look “hopefully exactly the same”, but alterations to agricultural payments as a result of Britain leaving the EU mean this could be a decade of change for the New Forest. Commoning doesn’t pay, and one of Sevier’s little male foals is worth just GBP15-20. “Unless you inherit, you cannot afford to be a commoner,” she says. “We don’t make any money. It’s love.” 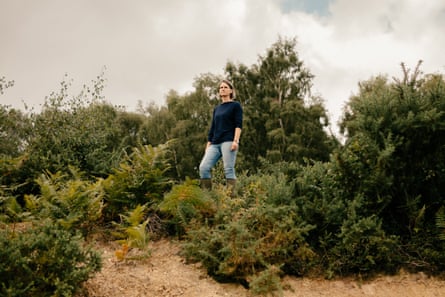 At 42, Lyndsey Stride is a few decades younger than the average commoner. She is a forest school teacher and granddaughter of a “romantic Londoner” who cycled to the forest in her early 20s then moved to the park permanently. Stride now owns 20 cows with her husband, Robert, who is a subcontractor, mainly working for the Forestry Commission.

There is a charm to commoning life, says Stride. Like Sevier, she can predict the weather depending on which way the cattle turn out of the yard. She takes her two children out on expeditions to find the cattle, which sometimes takes three or four hours. “It’s a wonderful way of life. We don’t have expectations about expensive holidays or expensive things because other people come for their holiday here. We don’t fly, if we go away we go to Dartmoor for three days to meet another commoner,” says Stride.

The couple bought their house through the commoners dwelling scheme, meaning they must commit to commoning for as long as they live there. On average only one of these houses is built a year. The New Forest is the UK’s most expensive national park: a house with land goes for more than a million. 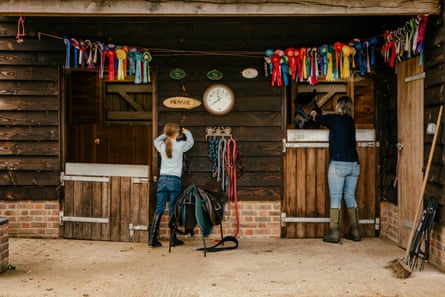 Stride’s cows descend from a cow Robert’s mother was given when she got married. Robert’s mother trained her cattle to forage by going out with a bucket and showing them where the best grass grew. Now the cows pass this valuable knowledge down through generations.

Stride still feels like a new commoner. “For me the difference between the old and new commoners is the depth of knowledge which has been gathered and passed down through the generations. No matter how much I learn or listen to the stories, they aren’t my stories … I feel welcome but I am deeply respectful of those who have been commoning for a long time.”

Commoners graze their cattle in different ways at different times of year. “The beauty of the forest is that we don’t work as a team,” explains Stride. “If we were one massive herd and the cattle were all managed in the same way, we wouldn’t get those habitats … You would never want one system with people expected to conform to those patterns.” 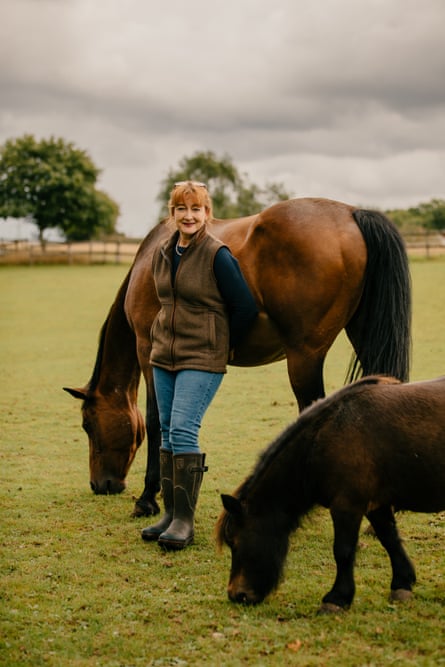 Gale Gould moved to the New Forest in 2012. Gould, who is in her 50s and studying for a PhD in the politics of New Forest enclosures, discovered she had commoning rights with her new house. She felt a duty to maintain the tradition and so got half a dozen ponies and prised her way into the community. “There are no books on it,” she says. “I’ve had to learn to read the landscape.”

She learned to take part in pony drifts, where ponies are rounded up and driven into holding pens by commoners on horseback (these annual autumn drifts were ordered by Henry VIII in 1540 and the methods have changed little since). She learned New Forest terms such as “levancy” and “couchancy”, which refer to the number of animals that can literally “get up” and “lie down” on the land. She learned that asking a commoner how many ponies they own is tantamount to asking a woman how much she weighs.

Very few outsiders learn to become proper New Forest commoners. It’s not just biodiversity, it’s human heritage that’s being preserved here, says Gould. “It’s about neighbourliness and everyone knowing each other, and helping each other out. A lot of people have only begun to realise this after Covid – they’ve had to rely on neighbours because they haven’t had friends and family. That’s been really encouraging, but forest people have been doing that since the dawn of time.”

- December 3, 2020 0
We applied for a grant under the government's Green Homes Grant scheme, 12 days after it started, to replace our gas boiler with an...

- December 18, 2020 0
Wood burners triple the level of harmful pollution particles inside homes and should be sold with a health warning, says scientists, who also advise...

The coming recession is the best reason to step up the pace of renewables...

- May 29, 2020 0
The Covid-19 recession will bring fiscal stimulus on a massive scale. There are high hopes that the recovery will be green but it could...

- May 20, 2020 0
The global growth of renewable energy will slow for the first time in 20 years due to the impact of the coronavirus pandemic, which...
© Copyright www.thepoliticalplaybooks.com