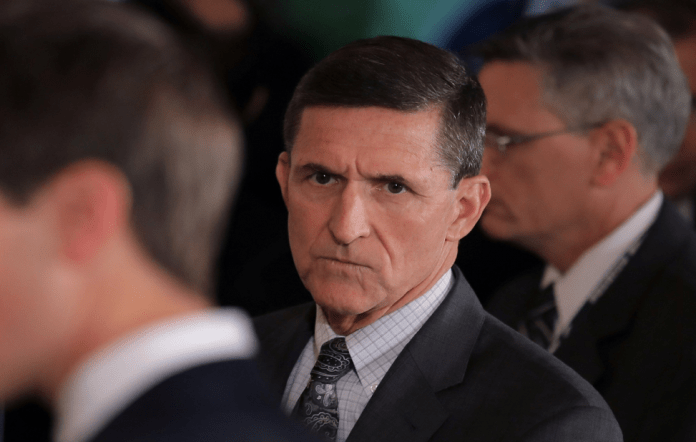 The wishes of Trump’s base have officially come true after nearly four years of endless waiting and wishing.

According to a statement released by the Office of the Press Secretary, General Michael Flynn, the former National Security Adviser to President Trump, is now a free man:

“Today, President Donald J. Trump signed an Executive Grant of Clemency granting a Full Pardon to General Michael T. Flynn. The President has pardoned General Flynn because of he should have never been prosecuted.

An independent review of General Flynn’s case by the Department of Justice – conducted by respected career professionals – supports this conclusion.

In fact, the Department of Justice has firmly concluded that the charges against General Flynn should be dropped. This Full Pardon achieves that objective, finally bringing to an end the relentless, partisan pursuit of an innocent man.”

Three years of dealing with manipulative prosecutors and tirelessly working day and night with his legal team to dismiss his case. And with none other than former federal prosecutor Sidney Powell on his team, who is now expected to reveal an explosive bombshell of a lawsuit about the fraudulent 2020 Presidential Election by the end of this week.

Despite what you will hear from pundits and boneheads in the mainstream media, Flynn did not lie because he wanted to. He was literally pressured and tricked into it during the interrogation he received from the FBI, according to an unsealed handwritten note written by an FBI official:

“What’s our goal? Truth/Admission or to get him to lie, so we can prosecute him or get him fired? If we get him to admit to breaking the Logan Act, give facts to DOJ & have them decide. Or, if he initially lies, then we present him [redacted] & he admits it, document for DOJ, & let them decide how to address it.”

You want to know what I hope happens out of all of this?

I hope that General Flynn uses his newfound freedom to go after the crooked FBI and sue them for every single penny that he deserves.

But more than that, I want to see several high-profile names being pardoned over the next few weeks. Edward Snowden, Ross Ulbricht, Julian Assange, two of which are prominent whistleblowers responsible for exposing the truth about how corrupt our government is.

If Trump follows through with these long-requested pardons from his supporters and freedom-fighting individuals all across the political spectrum, he will have made history unlike any other POTUS in modern history.

And who knows… we might even see a few lunatic far-left liberals have an anxiety attack!

What do YOU think about the pardoning of Michael Flynn? Too little too late, or exactly what we needed right now? Reply to this newsletter and share your thoughts with us!

Without Trump, Mainstream Media Is Broke and Penniless

Have you ever stopped and considered why the mainstream media loves to obsessively focus on nobody else and nothing else but every single thing done by President Trump, no matter how major or minor?

They do it for one simple reason: Trump gives them more clicks on their articles and more views on their shows, which is massively profitable for the news networks.

And the numbers back me up, according to reporting from Axios. Just take The Washington Post and The New York Times, for example…

To add further context to this data, their ventures into writing more opinion columns and creating more opinion podcasts have especially been lucrative. Any monkey who can type on a keyboard and endlessly babble on about “ORANGE MAN BAD” is automatically qualified to be a journalist for a day.

Which leads to the big question: What in the hell are these media networks going to do if Trump is no longer President? Why would people even bother to tune in or read their newspapers?


Biden will likely be one of the most boring Presidents in all of US history and the media will do nothing but fawn over him. So even with a prosperous economy, they’ll find themselves running out of money – and stories – real quick…

When You’re Rich, You Can Get ANYTHING You Want Before Anybody Else

Being ultra-wealthy and well-connected to the world’s most private yet high-net-worth networks can get you extremely far in life. One connection – or one call – is all you need to access the highest quality of anything you could possibly want… even the COVID-19 vaccines.

Knightsbridge Circle happens to be one of the networks I talked about, and they’ve made a huge pivot towards offering coronavirus-related services. Exclusive dining at restaurants, private jets, the best quarantined hotels, and so on. Just be ready to pony up $50,000/year for your membership.

But now, despite the COVID-19 vaccine being unavailable to the public until 2021, members of the group can get their hands on it as early as December 1st. It turns out they have a huge network of doctors and medical workers who can secure enough doses for their 500 members.

Nothing more I can say about this story, other than to show you that certain people live a VERY privileged kind of life. One that you and I can only dream about…

The state of California has dealt with the COVID-19 pandemic in the most reckless manner possible. Officials impose draconian restrictions on citizens while hypocritically refusing to follow them in their own private lives… and as it turns out, they are clueless about why they’re enforcing these restrictions!

As of yesterday, all outdoor dining at restaurants is being restricted after the initial announcement was made on Sunday. It was just another move that fit the “flatten the curve” and “reduce the spread” narratives.

But when a meeting on Tuesday took place with the LA Country Board of Supervisors, the Department of Public Health officials were unable to come up with any meaningful data to support their latest move. They had no choice but to blatantly admit they had ZERO data to support the shutdown of outdoor dining.

All they had was data from indoor dining (based on a single study done by the CDC), nor were they able to provide any proof of a link between outdoor dining and the ongoing rise of COVID-19 cases in Los Angeles. But nevertheless, like the idiots they are, the public health officials voted 3-2 in favor of implementing the restrictions.

The Quarantine Recommendations Will Go Down from Fourteen Days to Seven

In what can be perceived as an unexpected move from the US Centers for Disease Control and Prevention (CDC), their official recommendations for self-quarantining have gone down from 14 days to just 7-10 days. More details will later emerge about the exact length of the quarantine and how individuals will be tested for COVID-19 during that time period.

When asked for comment, CDC incident manager Dr. Henry Walke had this to say about the trade-off between shortening quarantines and possibly missing some COVID-19 infections:

“We do think that the work that we’ve done, and some of the studies we have and the modeling data that we have, shows that we can with testing short quarantines… if people test negative then their probability of going on and developing an infection after that is pretty low.”

One of the main motives behind shortening quarantine times is to increase compliance to the rules. Ideally, people will follow the recommendations as a smaller window for self-isolating is easier to bear.

I’m all for it, so let’s see if their theoretical predictions end up playing out in reality…

Will Money Be Enough to Get People Vaccinated for COVID-19?

The old saying, “Anybody will do whatever you want if you just give them the right price,” is about to become more relevant than ever.

It turns out that some economists and academics are considering the idea of PAYING people to take the COVID-19 vaccine. Apparently, this idea will persuade vaccine skeptics – not the hardcore anti-vaccination people – to get off their a**es and voluntary take the vaccine.

As for the exact dollar amount… well, that varies. Brookings Institution economist Robert Litan has suggested $1,000 per person, which would amount to $270 billion if 270 million Americans got vaccinated in exchange for a small wad of cash.

Additionally, a Harris Poll survey of 2,000 Americans found that some people had a dollar amount in their mind when asked how much they believe the government should pay people to get vaccinated for COVID-19:

Granted, answers on a poll do not necessarily reflect how people will act in a real-life situation. But it does point to an interesting phenomenon of people who will happily overcome their fears if the outcome is direct financial compensation.

I’m curious to know: What is YOUR dollar amount for taking the COVID-19 vaccine, regardless of your fears or concerns about the safety of the vaccine? Or would you NEVER sell out, no matter how high the price? Reply to this newsletter and share your answers with us!

Permanent PJs and pivoting designers: how the pandemic hit the fashion world

The Guardian view on a green new deal: to save jobs and the planet...

admin - June 9, 2020 0
Britain needs a green job-filled recovery from the coronavirus crisis. Unlike Germany and South Korea, it is far from clear that we will get...

China is scaling up its weather modification programme – here’s why we should be...

admin - December 15, 2020 0
Remember when Donald Trump wanted to nuke hurricanes so they didn't hit the US? Everyone laughed uproariously, but Trump's warped little mind was actually...

admin - January 5, 2021 0
Ministers are facing calls to make the business secretary, Alok Sharma, the full-time president of the Cop26 UN climate talks to be hosted in...

admin - October 5, 2020 0
Six steps we are taking to confront the climate crisis | Environment | The GuardianSkip to main contentIn 2019, the Guardian made a pledge...

admin - July 28, 2020 0
This image of a male saiga antelope with its magnificent horns was captured on a camera trap at a watering hole in the Stepnoi...
© Copyright www.thepoliticalplaybooks.com