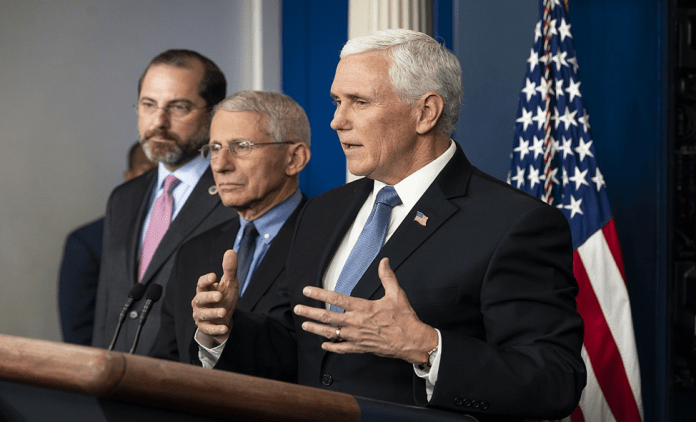 It turns out that today was supposed to be the “Vaccine Summit”. An event hosted by President Trump in the white house that would bring together every major company responsible for ensuring that hundreds of millions of Americans will get vaccinated for COVID-19.

I’m talking about the obvious players such as Moderna and Pfizer, which created the two vaccines currently under FDA review for emergency use approval (which is slated to happen on Thursday, by the way). As well as delivery companies such as FedEx and UPS and large pharmacy chains such as CVS and Walgreens.

I’m not exactly sure what the purpose of the “Vaccine Summit” is, by my best guess would be that the meeting would help coordinate the rapid distribution of the vaccines. To perhaps help all of these companies work together in unison.

Yet in a surprising act of betrayal, Pfizer and Moderna have officially stated that they will not be attending. They don’t want Trump’s invitation and they apparently want nothing to do with him… likely because they’re far more eager to work with the Biden administration team.

(This makes sense when you consider the real possibility that Biden may have been in close contact with both pharmaceutical companies regarding their clinical data before they ever spoke to President Trump… even BEFORE the November 3rd election!)

Pfizer has done everything they can to distance themselves from Operation Warp Speed, the initiative designed to distribute vaccines across the country as fast as possible, despite public knowledge that they made a deal with the Trump administration to supply tens of millions of doses.

Moderna, on the other hand, did not self-finance the development of their COVID-19 vaccine like Pfizer did. All the funds they got to make their candidate came DIRECTLY from Operation Warp Speed.

Classic textbook example of biting the hand that feeds you. All Trump wanted to do was provide the country with a life-saving vaccine and the companies directly benefitting from his funds won’t even meet with him for a single day.

Really goes to show you that pharmaceutical companies are a lot more political than you think. All of that virtue-signaling about being apolitical was nothing more than smoke and mirrors to keep the public in a state of complete ignorance.

What do YOU think about Pfizer and Moderna’s refusal to attend the Vaccine Summit? Reply to this newsletter and let me know if you believe they were out of line in refusing Trump’s invitation!

Canada’s Getting a LOT of COVID-19 Vaccines for Christmas!

Moderna recently got a big boost in orders from the Canadian government, promising the country that they’ll now supply 40 million doses of their vaccine.

Assuming prices of $32-37 per dose, this is a $1.3 billion dollar order! Even though we won’t hear any news about Canadian health regulators approving Moderna’s vaccine until the end of the month, their shares went up 4.59% during yesterday’s trading session (meanwhile, their vaccine is slated for FDA review on December 17th).

As for Pfizer, they’ve promised to supply Canada with 249,000 doses of their COVID-19 vaccine by the end of 2020. They’ll be delivered to the Canadian provinces on the basis of population, which means the most populated provinces will receive the largest share of doses. It’s a smaller order, but it’s meant to work out the bugs in the supply chain process.

If all goes well, you can expect multiple millions of doses as Canada’s next order. But all of this is contingent on (a) the delivery process going smoothly, and (b) Canada’s health authorities approving the Pfizer vaccine, which is likely slated to take place sometime this week. And as a side note, Pfizer’s shares are now up 2.26% as of yesterday’s trading session.

What an incredibly profitable time to be in Big Pharma!

With Pfizer and Moderna each slated to ship out multiple millions of COVID-19 vaccine doses in the US and across the world, they are already faced with some delivery challenges.

One solution to keep these vaccines at cold temperatures during transportation is through dry ice, thus eliminating the problem of needing multiple refrigeration units. But as MarketWatch points out, it’s not so easy to just throw a bunch of ice onto these vaccines:

“There are safety concerns about transporting large quantities of dry ice, which can emit carbon dioxide, on airplanes. Packaging dry ice in a container that does not allow adequate release of the gas could cause the container to explode from the built-up levels of pressure, a process known as sublimation. Dry ice can also deprive a confined space of oxygen, making it difficult to breathe.”

Despite this disadvantage, healthcare clinics are also being advised against the purchase of ultra-cold freezers until public health officials can find a work-around solution. As one chief executive in the transportation put it:

Let’s see what magical solutions Big Pharma can come up with. They’re guaranteed to find something, as a logistical problem like this WILL NOT get in the way of multiple billions of dollars in annual profit…

The Government May Not Be Able to Force COVID-19 Vaccinations… But Your Boss Can!

Wiser minds have been warning us for the past four months that it won’t be governments at the city, state, or federal level who make COVID-19 vaccinations mandatory. There are simply too many fundamental human rights and laws that would have to be violated in order to make such a large-scale enforcement possible.

However… that doesn’t mean companies don’t have the right to make every single one of their employees get vaccinated for COVID-19. In their minds, having every single employee take the shot will show their customers that their business is safe to be in.

According to several law professors who spoke to CNBC, they would be well within their rights to do so:

“Under the law, an employer can force an employee to get vaccinated, and if they don’t take it, fire them… Requiring a vaccine is a health and safety work rule, and employers can do that.”

But there ARE ways around this: Union strikes against the company, anti-discrimination laws that allow you to ask for an exemption if you have a medical reason for refusing the vaccine, and refusal to take the vaccine due to a violation of religious beliefs.

I’m curious to know: If your boss forced you to take the COVID-19 vaccine, would you comply or are you willing to lose your job? Reply to this newsletter and let us know where you stand on this matter!

Surprisingly, the news about Chicago’s shockingly high death count due to gun violence has completely disappeared from the attention of mainstream media. It’s almost like the city is completely invisible except when they are politically relevant to pushing an agenda.

Anyhow… the Cook County Medical Examiner has compiled some data about the causes of death for Chicago residents under the age of 20 between March 1st and December 1st. And the results are quite shocking:

I highlight those two numbers because I really want to emphasize just how far apart they are: For every single young person who died from COVID-19, 23 were killed by gun violence. And when you look at Chicagoans between the ages of 21 and 49, 264 have died to COVID-19 and 393 have died to gun violence.

Looks like the global health pandemic was never the REAL problem for young kids in Chicago. As always, it’s the seemingly unsolvable problem of gun violence that no mayor or politicians is brave enough to tackle.

A Government Shutdown Is Imminent

In order to avoid what could be a disastrous shutdown for the federal government on Saturday, there is a bipartisan effort happening overnight to pass a one-week spending bill. And the purpose, obviously, is to buy more negotiating time to come up with a second stimulus package for the American economy.

The vote for this bill is happening on Wednesday, and the fate of government funding hangs in the balance. CNBC best describes the gravity of the situation…

“The decision to buy more time comes as lawmakers rush to reach agreement both on a broad appropriations plan and a package to boost the health-care system and economy as a sustained COVID-19 infection surge stresses hospitals across the country.

…but familiar sticking points have emerged as a bipartisan group tries to put the finishing touches on legislation they hope will serve as the template for a year-end rescue package. Failure to act before the end of the year would send millions of Americans spiraling into deeper financial peril.”

As you can imagine, this is equivalent to a group project for school that is done at the absolute last minute before the teacher’s deadline. Everyone is furiously scrambling to give Americans SOMETHING for the first few months of 2021, even if it means a measly $908 billion package that doesn’t come with any stimulus checks for low-income Americans.

Let’s see what happens next, because if past history is any indication, I have a bad feeling that negotiations may not be successful…

admin - November 12, 2020 0
Exclusive: Chris Stark says cost is surprisingly low but criticises government for absence of a planReaching net zero carbon emissions in the UK is...

admin - February 23, 2021 0
Nearly £10bn worth of investments including in oil and gas made via pension funds in last financial yearLocal councils that have declared a climate...

SpaceX gets ready to launch first all-civilian crew to orbit