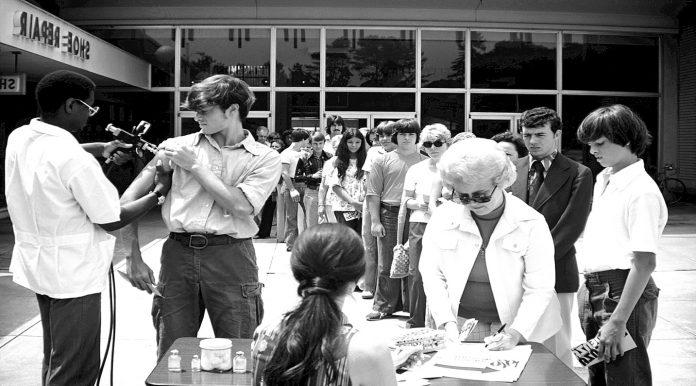 The federal government has proposed a rather ambitious goal of having 20 million Americans vaccinated for COVID-19 – whether through Pfizer’s or Moderna’s vaccine – by the end of 2020. Considering that each American needs two full doses per treatment, you would need to administer a total of 40 million doses.

Which begs the question: Where are we right now? According to CNBC, we’re not even close and we are exactly one week away from the end of the year:

“The Centers for Disease Control and Prevention said 1,008,025 shots had been administered as of Wednesday at 9 a.m.

The US would need to vaccinate more than 2.1 million people per day through Dec. 31 to meet its goal. Two vaccines – from Pfizer and Moderna – have been authorized for use by the Food and Drug Administration, and the US has shipped a total of 9,465,725 doses across the nation, according to CDC data.”

Ok, that’s the number of people vaccinated. How about the actual distribution of the vaccines themselves? Bloomberg reports with the answer:

“The US plans to ship 4.67 million COVID-19 vaccine doses next week, putting the government on track to send out 20 million shots by year-end, according to the federal official in charge of the distribution effort.”

“…15.5 million doses have been allocated to states, territories and a handful of cities.”

To be clear: If we’re being generous, 16 million out of the 40 million doses required to vaccinate 20 million Americans for COVID-19 have been distributed across the nation. We’re less than 50% towards completion of delivery and only 5% of the way towards actually giving the shots.

Not to mention the numerous mishaps that have happened with deliveries to date:

And I haven’t even gotten to the increasing number of Americans who are REFUSING to take the COVID-19 vaccine for personal reasons.

I don’t doubt these issues will be resolved. But so far, it’s a chaotic clusterf*ck engineered to meet a nearly impossible goal.

What do YOU think about the federal government’s overly ambitious goal? Is it indeed possible to have 20 million Americans vaccinated for COVID-19 by the end of the year? Reply to this newsletter and share your predictions with us!

Apparently, the Panic About COVID-19 Deaths Has Been Greatly Exaggerated…

We are now in the age where any scientific study or reporting that doesn’t fit with the mainstream narrative will be quietly silenced and removed from existence.

Case in point: News-Letter, the student newspaper at John Hopkins University, published a story which made some serious claims about the death rate of COVID-19 using raw data from the Centers for Disease Control and Prevention:

“Surprisingly, the deaths of older people stayed the same before and after COVID-19.

Since COVID-19 mainly affects the elderly, experts expected an increase in the percentage of deaths in older age groups. However, this increase is not seen from the CDC data. In fact, the percentages of deaths among all age groups remain relatively the same.

All of this points to no evidence that COVID-19 created any excess deaths. Total death numbers are not above normal death numbers. We found no evidence to the contrary… a decreased number of heart attacks and all the other death causes doesn’t give us a choice but to point to some misclassification.”

Guess what happened to the story? It was removed once staff members heard of the story spreading it around – NOT the decision made by the writer, who noted that her analysis could easily be re-done using the data sources provided.

I highly doubt the story was retracted due to “dangerous inaccuracies” and “fear-mongering.” If your thinking lines up with me, I think we know the real reason why the story is no longer published…

Big Tech Censorship Will Get a LOT Worse in 2021…

Rubin Report host and founder Dave Rubin recently sat down for an interview with Alex Marlow, the editor-in-chief for Breitbart. And during this little sit-down, he had a very ominous message about how Big Tech will operate after the 2020 Presidential Election:

“If Biden gets in, and especially if [Democrats] have the Senate — Trump was the last thing that was stopping Big Tech from lowering the boom — but I think 2021 will be the year of the bannings. It’ll be soft bannings at first. It’ll be more algorithmic depressions, deboosting. shadowbanning, that sort of thing, but then they’ll start picking people off.

If [Democrats] take the Senate, too, the radical thing that we are all fighting — because it’s basically everyone versus the wokesters — the wokesters will have nothing to stop them.”

In other words, whatever you’re seeing right now is just the tip of the iceberg. Unless Trump does something drastic in the next two weeks to reclaim his role as POTUS and serve another four-year term, our conception of a “free society” will cease to exist.

Anybody who dares to speak against whatever Big Tech promotes will quickly find themselves deplatformed and left without a voice. And I pity those who think this censorship will only stop at right-wingers and conservatives…

UK Budget Preview: What can we expect?

WHO Warns on Covid, China on Bubbles; Retail Earnings Due – What’s up in Markets

‘The bliss of a quiet period’: lockdown is a unique chance to study the...

admin - April 27, 2020 0
Peregrine falcons have swapped sea cliffs for the UK parliament and red-crowned parrots have left tropical forests in Mexico for the leafy neighbourhoods of...

admin - June 18, 2020 0
Tackling systemic racism is fundamental to achieving environmental and climate justice, according to leading activists, as Covid-19 disparities and the global uprising against police...

Country diary: the farming year begins with a bang for the ewes

admin - November 20, 2020 0
The new farming year started with a bang on Guy Fawkes night after we loosed seven tups among the yows on our upland farm...

admin - May 3, 2020 0
A brown bear has been spotted traversing a rugged and sparsely populated area of north-west Spain for the first time in 150 years thanks...