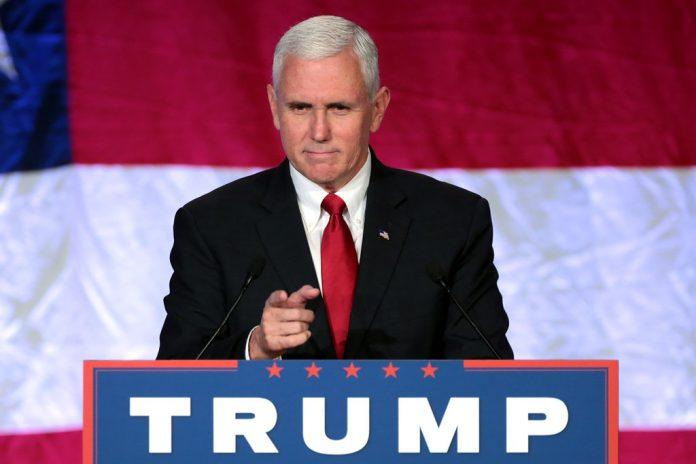 January 6th is one week from today. And it’s the day where all of the Electoral College votes are going to be counted by Vice President Mike Pence to decide who the OFFICIAL President of the United States will be.

Once this day has passed, there will be no more chances or opportunities for either presidential candidate – Trump or Biden – to contest the results. Short of some cataclysmic event where someone dies or gets arrested, it will all be over and we will look forward to the inauguration on the 20th of January.

But the question remains… what powers does Pence have?

According to MarketWatch, the fate of the country literally lies in his hands:

“As President of the Senate, Pence will chair the proceedings, and many prominent conservatives now argue that the Constitution grants the vice president the power to unilaterally accept or reject the presidential election results from any state he chooses.

Federal law stipulates that during the joint session, Pence will open envelopes containing the votes of electors for each state in alphabetical order. He will then had them to tellers that announce the results.

If both a representative and a senator agree to object to a state’s election results, the Senate and the House of Representatives will adjourn to their separate chambers to debate the matter for up to two hours and then hold a vote on whether to reject a slate of electors.”

It’s important to emphasize that if an objection takes place, the final decision lies in the hands of Pence to determine if a slate of electors will be accepted or rejected.

In the first situation, Pence overturns enough electors to the point where Trump has more Electoral College votes than Biden and retains his role as the 45th President of the United States for an additional four years.

In the second situation, Pence goes along with the “official” results when the Electoral College votes were submitted earlier this month and Biden will be the 46th President of the Unites States as of January 20th.

In the third situation, neither presidential candidate has a total of 270 Electoral College votes. In which case, the decision-making power is transferred over to Congress:

“The House of Representatives elects the President from the 3 Presidential candidates who received the most electoral votes. Each State delegation has one vote and it is up to the individual States to determine how to vote… A candidate must receive at least 26 votes (a majority of the States) to be elected.

If the House of Representatives fails to elect a President by Inauguration Day, the Vice-President-Elect serves as acting President until the deadlock is resolved in the House.”

Considering that the majority of the state representatives voting are Republicans and will vote down their party line, the idea is that Trump would cinch a last-minute, 11th-hour victory.

We’ll see what happens come the 6th of January. But at this point, it’s all up in the air.

What do YOU think will happen on January 6th? Will Pence step in as the ultimate American patriot and help Trump stay as POTUS, or will he cave to the Deep State and elect Biden as the next President? Reply to this newsletter and share your predictions with us!

In light of the new coronavirus mutation spreading fast across Europe, combined with the tightening of lockdown conditions in response, several countries are trying to produce COVID-19 vaccines as fast as possible in the hopes it will lead to a speedier exit from the pandemic.

From The Financial Times:

“The EU has ordered 300 million doses of the BioNTech/Pfizer vaccine — enough for 150 million people, as two doses are required for each person, as well as hundreds of millions of doses of vaccines yet to be approved, including those made by AstraZeneca, Sanofi-GSK, Johnson & Johnson, CureVac, and Moderna.”

“In Germany – a country of 80 million people – as many as 13 million doses are expected by the end of the first quarter. As a result, officials are pleading with pandemic-weary residents to stick to distancing and hygiene measures with most having to wait months for an inoculation.”

But there are still some fundamental problems with this hurried approach…

So in short… you can expect a never-ending annual campaign for COVID-19 vaccinations, especially as new “vaccines” may have to be made for each new variant of COVID-19 that appears.

When It Comes to COVID-19 Vaccines, the “G” in Germany May Stand for “Greedy”

Get a load of this breaking news story from MarketWatch:

“The European Union’s mass vaccination campaign came under fire on Tuesday, after Italians accused Germany of grabbing too much vaccine, and some care-home workers were injected with five times the recommended dosage in a city 150 miles north of Berlin.

Politicians in Italy have complained that the EU’s largest member state, Germany, could be getting more than its fair share of the vaccine developed by US drug company Pfizer and its partner BioNTech — the latter is based in the German city of Mainz.

A further vaccine malfunction, this time in southern Germany, saw officials transport the Pfizer–BioNTech vaccine, which needs to be stored at about -70C, in a picnic hamper cool box that failed to keep it at the required temperature. Around 1,000 doses had to be returned.”

All of this over a stupid vaccine!

You remember how health authorities have been desperately trying to get 20 million Americans vaccinated for COVID-19 before the end of 2020?

It’s the second-last day before 2021 begins, and we are NOWHERE near that goal. Not even close, according to the official numbers. From CNBC:

“With only a few days to go, the United States will likely fall short of its goal to vaccinate 20 million Americans by the year’s end as the nation embarks on what will be a historic campaign to inoculate hundreds of millions of people against the coronavirus by the middle of next year.

The Centers for Disease Control and Prevention said just more than 11.4 million doses had been distributed since Dec. 13 but only about 2.1 million had been administered [as of Monday].”

We can even go to the “COVID-19 vaccine tracker” from Bloomberg, which was last updated yesterday night at 8:46pm EST:

“The biggest vaccination campaign in history has begun. More than 5.1 million doses in 22 countries have been administered, according to data collected by Bloomberg. Delivering billions more will be one of the greatest logistical challenges ever undertaken.

Vaccinations in the US began Dec. 14 with health-care workers, and so far 2.32 million doses have been administered.”

This is far slower than what health authorities would have liked, which REALLY makes you wonder how hundreds of millions of Americans will be vaccinated for COVID-19 by the end of 2021…

In Spain, Those Who Don’t Take the COVID-19 Vaccine Will Be Put on a “List”!

Pay close attention to how countries in the Eastern Hemisphere of the world are forcing people to take the COVID-19 vaccine. There’s a good chance that whatever they’re doing, the federal government in the US will eventually start doing.

To show you what I mean, let’s take a look at what Spain’s Health Minister Salvador Illa plans to respond to individuals who refuse the COVID-19 vaccine:

“What will be done is a registry, which will be shared with our European partners… of those people who have been offered it and have simply rejected it.

It is not a document which will be made public and it will be done with the utmost respect for data protection…. The way to defeat the virus is to vaccinate all of us or the more the better.”

And there it is – a blacklist that exists but cannot be viewed by the general public. You can bet your bottom dollar this “list” will be used in ways to make your life extremely uncomfortable and restricted.

Even if your reasons for refusing the vaccine are totally legitimate and your skepticism is justified by publicly available health data, the mere act of dissent will be enough to have authorities target you for further questioning and disciplinary action.

What do YOU think about the idea of a “registry” for people who don’t take the COVID-19 vaccine? Will it happen in the US, or is it to great a violation of our fundamental rights as Americans? Reply to this newsletter and share your thoughts with us!

According to the WHO, the COVID-19 Pandemic Is NOT the “Big One”

I don’t have the answer to the question, but World Health Organization’s head of emergencies Mike Ryan believes the “big pandemic” is right around the corner. From the last press briefing of 2020:

“This pandemic has been very severe… it has affected every corner of this planet. But this is not necessarily the big one.

This is a wake-up call. We are learning now how to do things better — science, logistics, training and governance, how to communicate better. But the planet is fragile. We live in an increasingly complex global society. These threats will continue.

The likely scenario is the virus will become another endemic virus that will remain somewhat of a threat.”

And this is WITH several COVID-19 vaccines being approved and distributed all around the world for everyone to use (assuming the majority of the world population complies).

If we take the WHO at their word and their predictions come true, we’ll see lockdown restrictions and removals of our personal freedoms unlike anything ever recorded or seen in human history…

admin - February 22, 2021 0
At first sight there are few obvious signs of the oil spill on the Mediterranean beach. Wooden parasols stand solitary in the sand, while...

Why should we listen to birds? (part one) – podcast

admin - December 15, 2020 0
Our colleagues from the Age of Extinction project, Phoebe Weston and Patrick Greenfield, are back with two new episodes asking whether birdsong might be...