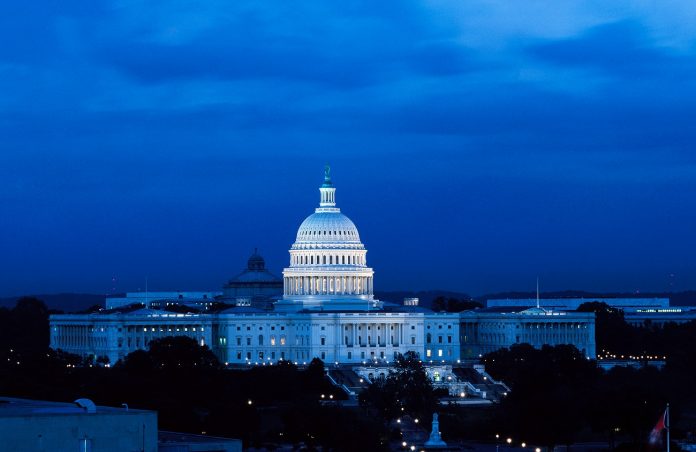 … and it was as much of a disaster as you expected.

After an inspiring speech by President Trump about the future of populism and putting Americans first no matter what, a million loyal Patriots started marching all the way to Capitol Hill. Because at 1 pm EST yesterday, the Electoral College votes were going to be certified – or rejected – by Senators and House Representatives on both sides of the political spectrum.

How did it go down, you may ask? I would have to quote 20 different news stories just to give you a glimpse of what the hell happened.

First, and I don’t know how this happened, but the pro-Trump crowd managed to burst through the barricades set up by DC police and enter Capitol Hill. WHILE the vote certifying process was taking place.

Not even 30 minutes in, the entire building was placed on complete lockdown and the police had to step in. Tear gas was being released, and all of the important people – journalists, lawmakers, politicians, staff members – were forced to evacuate and hide in underground tunnels thanks to the help of Secret Service.

Vice President Mike Pence himself had to be evacuated out of fear for his own personal safety. After all, a few hours before Trump was scheduled to give his speech at 11 am, he put out a four-page document saying that he would not involve himself in preventing the certification of Joe Biden as the 46th President of the United States.

Talk about the ultimate stab in the back after four glorious years of the best presidency ever – et tu, Pence?

Several Trump supporters were arrested by police. Four of them died – three from “medical conditions” and one of them from a gunshot wound received during a confrontation with a police officer. A curfew for the entire city of Washington DC had to be ordered for 6 pm.

It got so bad to the point where President Trump himself had to release an emergency broadcast from his Twitter account, and the tweet itself was “locked” out of being liked, retweeted, or replied to out of concerns about a “risk of violence.” Here was his final message:

…This was a fraudulent election, but we can’t play into the hands of these people. We have to have peace. So go home, we love you, you’re very special, you’ve seen what happens, you’ve seen the way others are treated that are so bad and so evil. I know how you feel, but go home and go home in peace.”

As I’m writing this right now, every single objection to certifying the Electoral College votes has been voted against and Joe Biden has been declared the winner.

But sadly, this is the start of the endless efforts to make Trump’s life as miserable as possible with the ~14 days of his presidency he has left:

If nothing else, I hope Trump can arm himself with all the physical and legal protection he can get. Because it won’t just be him that the world wants to see indicted, arrested and killed – they want his family, and friends, and ANYBODY who has helped him locked up and sent to re-education camps.

What do YOU think about yesterday’s chaos around Capitol Hill? Did it end the way you thought it would? Reply to this newsletter and let us know how you felt!

The NYSE Delists Chinese Telecom Companies, Re-Lists Them, Then Delists Them AGAIN!

It’s one thing to deal with an indecisive person who keeps on changing their mind every 24 hours. But when the LARGEST financial exchange in America does it, you have to wonder what the hell is going on.

“The New York Stock Exchange will delist three Chinese telecommunication giants after all, saying its second reversal in two days came after new guidance from the Treasury Department.

…it will remove US-traded shares of China Telecom, China Mobile and China Unicom from the Big Board to comply with an executive order signed by President Donald Trump. The order sought to bar American companies and individuals from investing in firms that the administration alleged aid the Chinese military.

…The NYSE said the latest reversal was due to new guidance from Treasury’s Office of Foreign Assets Control that said people in the US could not engage in certain transactions with the three companies as of next Monday. Trading of the three securities will be suspended at 4 p.m. ET on Monday.”

At this point, who knows what the hell is going on anymore? I’d better not see another story tomorrow afternoon saying that the decision has been reversed for the third time in a row.

Meanwhile, in the beautiful island of Greece, it turns out that throwing your own New Year’s party in violation of the country’s lockdown rules can land you some hard prison time.

“A teenager was sentenced to six months in prison for organizing a New Year’s Day party in the city of Thessaloniki in violation of Greece’s Wuhan coronavirus lockdown measures.

The 19-year-old was convicted at a Thessaloniki court this week which found him guilty of violating the lockdown measures when he invited nine friends to a party at an apartment owned by his grandmother on New Year’s Day.

…In addition to the six-month prison sentence, with an additional three years suspended sentence, the 19-year-old was fined €3,000 and the various party guests were fined €300.”

And as with every story similar to this one, it’s always that one Karen-like neighbor who can’t help but snitch on other people to make themselves feel important. We just recently saw this in Canada, where two family members in Gatineau, Quebec were arrested for similar reasons.

Which leaves me with the question I have for you: Do YOU think people should face jail time and fines just for violating the lockdown rules in a way where nobody is getting harmed? Reply to this newsletter and tell us where you stand!

I was reading The Wall Street Journal and a VERY interesting argument was made in one of their opinion articles:

“While airlines are already grappling with this new reality, the car industry has barely started to think about its own, more gradual exposure to the rise of videoconferencing. The impact of lower vehicle usage on sales could run deep, even if it takes years to play out.

The much-hyped threat to car ownership from smartphone-driven services such as Uber has so far come to little; indeed, the nascent car-sharing trend has shifted into reverse during the pandemic. After COVID-19, the long-term risk to car sales from the technology sector might be better embodied by Zoom.

If consumers end up driving less out of basic necessity and more for pleasure, they may eventually want fewer—and different—sets of wheels.”

In other words, the COVID-19 pandemic may not have destroyed the automobile industry as much as we think it did. If anything, people were buying used and new vehicles and much higher prices. They wanted transportation, but they wanted everything to be as private as possible.

Why take a smelly and crowded bus or train when you can just safely cruise around in a car that only YOU have been in? However, don’t think the rise of remote work won’t have its own negative impact on car sales…

Storm system triggers severe weather and tornadoes in US

admin - March 18, 2021 0
Numerous tornadoes reported south of Amarillo, while heavy snow falls in Colorado and Wyoming A storm system crossing the central US has caused an...

admin - March 22, 2020 0
Last century the Forestry Commission sparked anger with a mass planting of conifer trees designed to provide a national reserve of timber because the...

Why it’s healthy to be afraid in a crisis

admin - March 25, 2020 0
As a mental health professional, I disagree with the message in Paul Daley's article (We face a pandemic of mental health disorders, 24 March)....